Donald Trump is withdrawing US troops from Germany to ‘punish’ Berlin for buying Russian gas and for not contributing enough to NATO, but a fresh survey shows that people in that country are actually glad that’s he doing so. 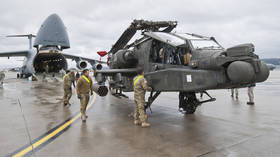 Around 47 percent of participants in research conducted by pollster YouGov on behalf of DPA news agency, said they were in favor of the Pentagon’s decision to pull out almost 12,000 American soldiers from Germany.
Moreover, one in four surveyed Germans insisted that the US military presence in the country should be reduced to zero.

Only 28 percent thought that the 36,000-strong contingent must remain as it is, while four percent said that they wanted more American soldiers. The others declined to answer.

The views of the German public on the issue are in sharp contrast with those of the country’s politicians. Five out of six parliamentary groups in the Bundestag have been opposing the withdrawal, with only the Left Party saying that the Americans must leave completely.

“Instead of strengthening NATO, it’s going to weaken the alliance,” Norbert Rottgen, who stands to succeed Chancellor Angela Merkel at the helm of the Christian Democrats Union, said of the US move. The leader of the Christian Social Union, Markus Soder, also warned that the pullout out “puts a burden on the German-American relationship.”

Last week, US Secretary of Defense Mark Esper announced that the Pentagon would withdraw almost 12,000 troops from Germany, which was a significant increase from the initially planned number of 9,500.

Trump, whose relations with Germany and Chancellor Angela Merkel have been rocky from the start of his presidency, recently pointed out that the US can’t remain committed to protecting Germany from Russia when it “pays Russia billions of dollars a year for energy” and “is very delinquent in their 2% fee to NATO.”