Olivia de Havilland, who starred in ‘Gone with the Wind,’ has died aged 104. The two-time Oscar winner was the last remaining star of the iconic film, and is credited with taking on the Hollywood studios in a landmark court case. 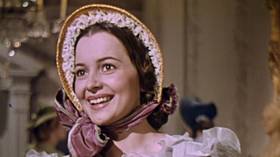 De Havilland played Melanie Hamilton Wilkes, a friend who is seen as a rival by protagonist Scarlett O’Hara in the 1939 classic.

#oliviadehavilland , star of a bygone Hollywood age has died aged 104. She had a storied career ,winning best actress ⁦@TheAcademy⁩ awards for To Each His Own & The Heiress. To many though , she’ll be remembered as kind-hearted Melanie in Gone With the Wind.#RIPpic.twitter.com/W20CPhiIMR

De Havilland is credited with helping to take down Hollywood’s studio system after she sued Warner Bros. in the 1940s to be free after her contract had expired. At the time, Hollywood lawyers viewed contracts as being suspended when an actor wasn’t working, so Warner Bros. wanted to keep de Havilland after her seven-year deal expired. The courts ruled that all artists’ contracts were to be limited to the calendar terms set out in their deals.

“No one thought I would win, but after I did, flowers, letters and telegrams arrived from my fellow actors,” she said in a 1992 interview. “This was wonderfully rewarding.”

De Havilland died of natural causes at her home in Paris, where she had lived since the 1950s with her late husband Pierre Galante, who died in 1998. She is survived by her daughter Gisele, son-in-law Andrew, and niece Deborah. She was previously married to Marcus Goodrich in 1946.

Born in Tokyo and raised in California, de Havilland had a strained relationship with her younger sister, actress Joan Fontaine, who won an Oscar before her, in 1942, when de Havilland was also nominated in the same category.

De Havilland was given the US National Medal of Arts by George W. Bush in 2008, and the Knight Legion of Honor by French President Nicolas Sarkozy in 2010.

She was the first female jury president at the Cannes Film Festival in 1965.