As many as one in every hundred patients hospitalized with Covid-19 suffer ‘punctured lung’ according to new research led by Cambridge University, further complicating treatment for those affected. 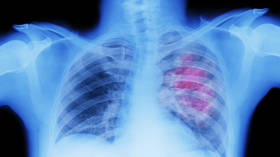 Symptoms of a pneumothorax or ‘punctured lung’ include shortness of breath and sudden, stabbing chest pains that are exacerbated by taking deep breaths during the coughing fits associated with Covid-19.

A punctured lung allows air to seep out and become trapped between the outside of the lung and the chest wall, eventually leading to the organ’s collapse under the accumulated pressure.

According to the new study, published in the European Respiratory Journal, tall young men or older patients with underlying lung disease were most at risk of suffering a punctured lung while undergoing treatment for severe Covid-19 infection (they are already considered at higher risk even before infection with the coronavirus).

The Cambridge researchers behind the study used admissions data from the 16 hospitals and consulted colleagues across the UK who reported similar findings.

“We started to see patients affected by a punctured lung, even among those who were not put on a ventilator,” says Professor Stefan Marciniak from the Cambridge Institute of Medical Research.

The researchers noticed an overall rate of 0.91 percent of patients with severe Covid-19 suffering punctured lungs.

However, even patients who would not fall into the aforementioned at-risk categories might suffer punctured lungs warned Marciniak, as many of the incidents of punctured lungs were diagnosed “by chance.”

Almost two thirds of patients who suffered a punctured lung survived but the researchers recorded just a 42 percent survival rate for patients over 70.

Men were three times more likely to suffer a punctured lung than women, possibly as a growing body of research indicates men are disproportionately affected by severe Covid-19 than women.

The researchers suspect that severe Covid-19 infection can cause cysts in the lungs which may, in turn, cause tears and punctures in the outer tissue. There is some evidence of this in observations made in X-rays and CT scans over the past few months.