Claire Molloy speaks to The42 about working as a doctor during the Covid-19 pandemic and the prospect of a women’s Lions team.

WHEN PATIENTS PRESENT to the A&E in the University Hospital of Wales, Dr Claire Molloy is one of the first faces they’ll see. 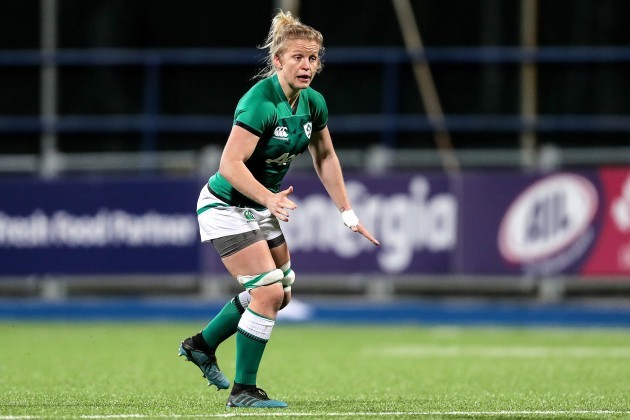 Covid, non-Covid, suspected-Covid: she treats all forms of ill-health and helps to link up patients with the relevant department for further care.

She’s been working in a locum capacity since last August, a decision she took with the uncertainty of the rugby calendar in mind. This means that she doctors on demand, filling in roster gaps to give her colleagues assistance when needed.

You might have seen her demonstrate that kind of link-play role in an Ireland jersey to great effect. She’s the regular choice for number seven in the pack with an impressive burst of pace in her boots.

We’ll be seeing that again soon. With the re-formatted Six Nations coming around the bend, Molloy will be taking a step back from her work and won’t be back in the scrubs again until about May or June.

“It’s not very pleasant for patients and staff alike,” Molloy tells The42, reflecting on her work at the heart of Covid hospital care.

The purpose of this chat is to discuss the possibility of a first-ever Women’s Lions team being created. But more about that later.

“I think one of the hardest things is the loneliness for patients,” Molloy continues, “We’re used to seeing sick patients pre-Covid with a relative to hold their hand and that’s one of the more difficult elements that you don’t have that and can’t have a nurse or doctor with the patient.

“That’s just not the nature of how we work in A&E or any apartment really outside of intensive care.

“So that’s the most difficult thing; when they are sick, there’s nobody there to comfort them as much beside ourselves. And then we have other patients and other demands as well.”

While the world is naturally pre-occupied with the threat of coronavirus, other illnesses are still very much present among the public. Molloy and her staff are well equipped to deal with all those conditions, but the fears associated with the virus create challenges for those who are trying to provide those vital treatments.

“The impact of Covid is not just patients with Covid,” Molloy explains, “it’s the patients that have missed out on their routine appointments or avoided healthcare and [get]delayed diagnosis for cancers.

“The amount of old fellas that I see reluctant to come in because they don’t want to catch the Covid. And you’re kind of like, ‘No, no, you really need to be in here. Please come in.’ You’re stressing to the public that the health service is still the health service and it’s still open.

“We want people to come forward if they need to go to A&E.” 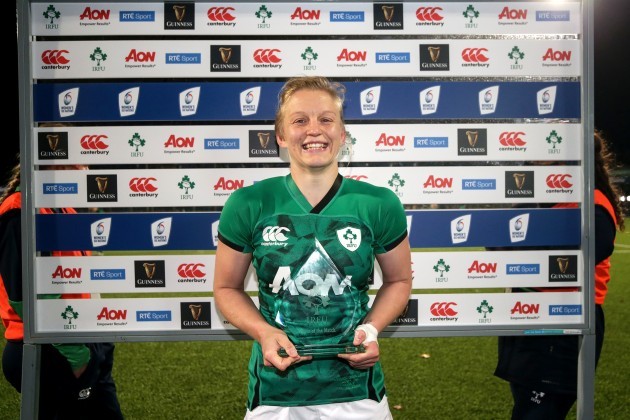 Claire Molloy receiving the Player of the Match award against Italy last year.

Molloy is part of a unique group that, in a time of tight restrictions and Level 5 laws, has managed to retain some form of normality in her life. She can work, train and play.

The gyms are closed to the public but not to elite athletes like Molloy who plays her club rugby with London Wasps.

She can even travel home to Ireland to go to training camps with her international teammates. The privilege to have that kind of access is not lost on Molloy.

“There’s a good contingent of Irish players at Wasps and we’re London-based.

“We’re pretty much training full-time with Wasps and we’re one of very few privileged people to be playing club matches and we’ve been taking advantage of that.

“And we’ve been flying back and forth to camps with numerous Covid tests. So yeah, travelling’s a bit different and airports are a bit different. But the work the IRFU have done and Wasps to play, train and travel safe, is brilliant.

“The fact that I can go to a gym [is]something 90% of the public can’t do, really. It’s a testament to the IRFU in making women’s rugby happen and allow us to train.”

The Six Nations fixtures were released during the week. Teams have been split into two pools of three in a condensed format of the competition, with Ireland grouped alongside Wales and France.

Each team will play two pool games and have one rest weekend, before a closing play-off weekend where the sides will face the equally-ranked side from the other pool.

Ireland’s rest has been allocated for Round 1 before facing Wales and France on consecutive weekends in their pool outings. The action all gets underway on 3 April with RTÉ carrying live coverage of all of Ireland’s games.

“I suppose it’s a novelty for us at this rate to have fixtures, times, broadcasters all in place,” says Molloy, relieved to see competitive rugby on the horizon in 2021.

“It’s exciting, after all our training weekends together, to actually play a Test. They’ve obviously changed the format so it’s a more competitive format.

“We want to be in that first-place final on the last weekend so it’s a different style of competition but still everything to play for.”

Ireland’s 2020 Six Nations campaign was hampered by disruption. Adam Griggs’ side had three games under their belt before the Covid-19 shutdown left them waiting until October for a restart which produced a 14-point victory over Italy.

Molloy was superb in that tie, helping herself to a try in a player-of-the-match display. She missed the first half of the tournament however, as she was on a sabbatical from international rugby.

“The time off was great to get the work done and get my exam over with,” Molloy recalls, “and finish the middle chunk of my training to progress to the latter stages. So that was brilliant.

“And then it was nice to experience club rugby as just club rugby, go in, do your bit and not have the international pressure. And to really enjoy the club environment.

“Wasps is a very close club even though I was living in Wales. It still felt like home, and it was like a mini-holiday when I came up for training. [I’d] stay with some of the girls and get looked after so that was quite nice.

“And then to be able to be a fan for the Irish girls. I came over to watch the first Six Nations game. It was nice to see different faces and kind of enjoy it. It was a good year, it served its purpose. I definitely missed playing for Ireland and it definitely made me want to come back.”

She clearly used her international break wisely as she took to the field against Italy in Donnybrook with a renewed energy in her game.

There were some understandable pre-game nerves however, as she waited to discover if she could still muscle it at international level.

But she needn’t have given any time to those doubts in the end. Indeed, the only pity about her return was that it was cut short due to Ireland’s final Six Nations game against France being cancelled.

“I was the only player left from my generation,” says Molloy, “and just to be able to take a step back and I’m getting a bit old, as I’ve been told.

“So just to go back and check, ‘Am I too old for this, or do I still have it?’ I was outrageously nervous for the Italy game. I remember the girls saying, ‘It’s your 70th cap.’ And I was like, ‘Shush.’

“You just want to know you can still do it and you don’t really know until on the night really.

“There’s something really special about getting to play at home and getting to play with those girls in the green so, yeah, the body was sore the next day, that’s for sure.

“But it was just a great experience to be involved in. It would have been great to play France. We would have challenged and second place in the Six Nations wouldn’t have been a bad outcome, far from it.”

The World Cup, scheduled to take place in New Zealand, has been postponed to 2022 due to the pandemic. Molloy admits that hearing the news was “a bit of an initial shock” as Ireland were ramping up preparations for their qualifier against Spain.

But in the same breath, she outlines the challenges that a tournament in the current circumstances would have presented.

Rules around quarantining, she explains, would certainly impact on performance levels. And the absence of supporters is not far from her mind either. 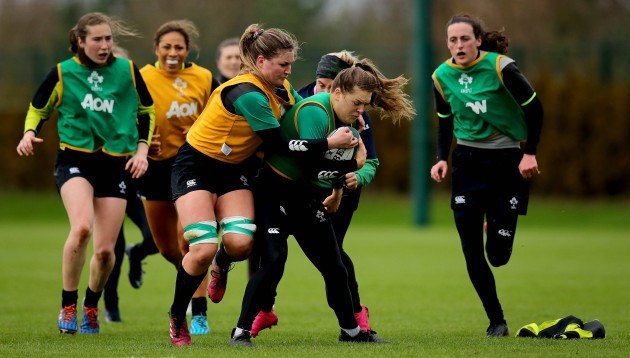 The Ireland Women’s rugby team during a training session.

“The risk of such a huge tournament going down at the drop of a hat – it’s the World Cup. It’s what you dream for and plan your life around for four years and what you train for.

“It just wouldn’t have been the best showcase for the women’s game if it had gone ahead this year.”

On a more positive note, there is plenty to look forward to in women’s rugby. A new annual global women’s rugby competition called WXV will launch in 2023. The competition will feature 16 teams across three tiers in a new September/October window, except in World Cup years.

It’s the promise of more meaningful competitive games, according to Molloy, outside of the Six Nations window.

Additionally, there is the possibility of a Women’s Lions team being formed. 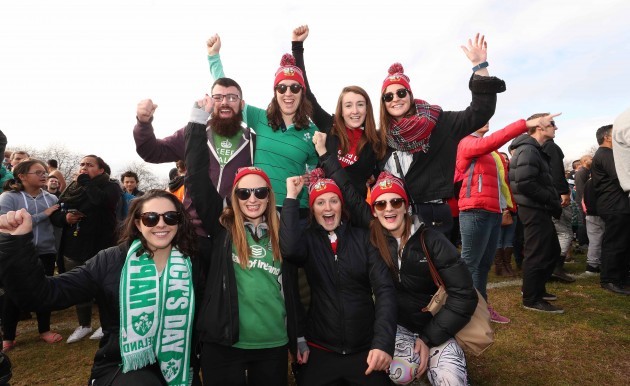 “It’s a huge opportunity to be a female Lions player or even the concept of being in the first women’s Lions team,” says an excited Molloy.

A feasibility study, backed by insurance company Royal London, is currently exploring the prospect of bringing this concept to life. The findings are expected this year, which will give a clearer indication of what we can expect for a Women’s Lions team, and when a tour might be on the cards.

“It’s exciting for all the players in the Six Nations to have that honour of being Lion no. 1 and that’s hugely special.

“And the investment of a major brand in women’s rugby in a feasibility study. This is something that is a guaranteed return, profit.

“This is just an investment in our sport and it’s a step forward from a major company that will hopefully encourage other companies to have a look at themselves and think about how they can support women’s rugby.”

That’s all down the line. For now, Molloy’s eyes are on the Six Nations and taking on the country where she works.

She says it’s too premature to pinpoint a time when all this Covid misery might be over. The evolving status of the virus makes it too difficult to make predictions.

The hope of retaining some normality and a chance to socialise by the end of the year is more realistic for now.

“I think it’s too much crystal ball gazing,” Molloy cautions. “We’re seeing a rise in numbers and cases in Europe. There’s already discussion in British media about a fourth wave and as depressing as it is, we have a virus that’s evolving and mutating.

“Like any flu pandemic, you have flu viruses that evolve and you get more vaccines. It’s hard to be optimistic that it’s going to be back to completely normal but I hope it’s something we can manage better and live with and complete public lockdown won’t be required.