First responders are battling more than 35 fires burning across more than 300,000 acres of land in Oregon, forcing thousands to evacuate their homes — and the governor is warning the worst could be yet to come. 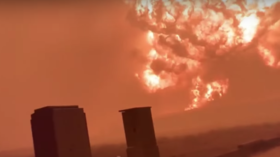 “Over the last 24 hours, Oregon has experienced unprecedented fires, with devastating consequences across the state. Our number-one priority right now is saving lives. This could be the greatest loss of human lives and property due to wildfires in our state’s history,” Governor Kate Brown said, addressing the emergency.

Firefighters, National Guard soldiers, and Red Cross volunteers are working “around the clock” to battle the blazes, and Brown is warning areas not battling fires to be “on high alert” and the current blazes are creating “the worst fire condition risks in 30 years.”

We’re currently fighting more than 35 fires, burning 300,000+ acres across the state. Winds continue to feed them. Places not burning now still face the worst fire condition risks in 30 years: dry air, dry brush, and hot winds. Everyone must be on high alert.

Brown confirmed the towns of “Detroit in central Oregon, Blue River and Vida in Lane County, and Phoenix and Talent in Southern Oregon” have been “substantially destroyed.”

Fires have been raging in the Pacific Northwest for days. Washington and California have been dealing with their own wildfires, one of which was sparked by a firework used at a ‘gender reveal’ party.