A judge has issued a temporary restraining order on federal agents deployed in Portland, ruling that they may not arrest, disperse or otherwise use force against reporters and legal observers covering ongoing protests there. 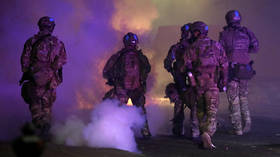 US District Court Judge Michael Simon ruled on Thursday that federal police must stop “arresting, threatening to arrest, or using physical force” on journalists and legal observers not suspected of a crime, following an injunction request from the Portland Mercury newspaper and the ACLU.

“Plaintiffs have been covering or observing the protests and they all have documented incidents of violence, threats, or intimidation by federal agents,” Simon said, citing their use of concussion grenades and rubber bullets, among other ‘less lethal’ weapons.

Plaintiffs at the Portland Mercury allege federal authorities have assaulted reporters, photographers and “other neutrals” documenting “the police’s violent response to protests over the murder of George Floyd,” saying the agents have repeatedly violated constitutional protections amid the heated demonstrations.

While Simon issued a separate restraining order against the city earlier this month imposing similar restrictions on local police, the Oregon chapter of the ACLU successfully added the federal government to the suit last week, paving the way for Thursday’s injunction. During a hearing ahead of his ruling, Simon signaled that he would side with the plaintiffs, saying it is “critically important” that journalists are able to witness the protests first-hand. He later cited a previous court ruling to offer a stirring defense of a free and independent media.

Anti-police brutality protests have raged on in Portland for more than 50 consecutive days, seeing frequent violent clashes between activists and law enforcement – both local and federal. While federal agents have been temporarily deployed to other cities to protect government property and historical monuments in recent weeks, they have remained in force for much longer in Portland, where they remain to defend a federal courthouse under siege by protesters, as well as other government property.