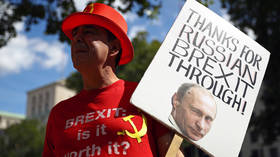 Speaking to RT’s Going Underground on Saturday, Lord Balfe told host Afshin Rattansi that accusations the Kremlin was controlling domestic affairs in Britain were “rather pathetic, frankly,” and noted it wasn’t unusual for some members of Parliament to have business connections to Russia.

“Full marks for the Russian government” if they were somehow behind Brexit, he joked. “I don’t think it had much to do with any foreign government,” he added, offering that it was down to “the basic xenophobia” of the people who voted to leave the European Union.

Lord Balfe said he “certainly” was not one of those who voted for Brexit, but that he couldn’t agree with the claims made in the long-anticipated report, which was released by the British Parliament’s Intelligence and Security Committee on Tuesday. He said he does not “blame Russia” or any other foreign country for his side losing the referendum.

Asked about the report’s argument that MI5 simply didn’t look hard enough to unearth any evidence of Russian meddling, Lord Balfe said the job of MI5 and the British Secret Service is to “crack down on terrorism, which costs lives on the streets,” and not to “go out looking for evidence of what may or may have not influenced a vote” in a referendum four years ago.

Lord Balfe also said Labour leader Keir Starmer’s recent call to reexamine RT’s broadcasting license in the UK might only end up giving a “boost” to the channel’s viewing figures.

“Is the Labour Party trying to say that it’s no longer in favor of free speech?”

The Conservative peer said it was time London began mending relations with Moscow, saying the countries do not have any problems “that can’t be solved through negotiation and a bit of good will.”