Amid reports of increasing violence, tension and drama at protests across the US, video footage showing arguably the most dramatic protester yet witnessed has gone viral online, drawing derision from many on social media. 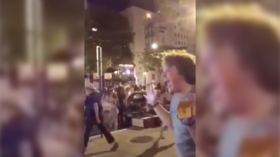 Roughly 1,000 protesters showed up for their now-nightly battle with the mysterious, masked and ‘unmarked’ federal agents as the sound of fireworks and the smell of tear gas filled the air. One diva’s voice stood out above the din over the weekend’s protests.

The video purports to show a Portland protester complaining after apparently being pepper sprayed, claiming he and his cohort had been traded “like rats,” while claiming they did “nothing,” all while hitting high notes worthy of any opera singer worth their salt.

“This is what happens when you give every kid a participation trophy…. and don’t spank children for bad behaviour…you create special snowflakes that have total meltdowns at the drop of a hat,” wrote one Twitter user.

One commenter couldn’t discern the dramatic cries and asked for subtitles, a request which was duly fulfilled, with a side of sarcasm and a touch of creative flair.

“You treat us like rats. You pepper sprayed us. We did nothing”. And then I think, “my mom will be so mad I’m out this late and she’ll never get the pepper spray out of my laundry. I hope she made Chef Boyardee tonight.”

Dude’s in the running for the galary of hysteria! pic.twitter.com/U4ffwwavCx

Elsewhere, two people were arrested following reports of gunshots as police discovered Molotov cocktails and reportedly confiscated large amounts of bleach. One person was taken to hospital for treatment of a non-lethal gunshot wound.