Any violation the Good Friday Agreement by London will make a trade deal between the UK and the US totally impossible, Speaker of the US House of Representatives Nancy Pelosi has warned. 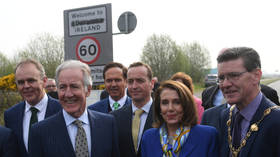 Pelosi issued a strongly-worded statement on Wednesday after British authorities admitted that their new ‘Internal Market Bill’ could violate international law in a “limited way.” The bill would allow the UK to circumvent its Brexit withdrawal agreement with Brussels, particularly in relation to the protocol on Northern Ireland.

“The Good Friday Agreement is the bedrock of peace in Northern Ireland and an inspiration for the whole world,” Pelosi said. “The UK must respect the Northern Ireland Protocol as signed with the EU to ensure the free flow of goods across the border.”

⚠️ Nancy Pelosi rows in.“If the U.K. violates that international treaty and Brexit undermines the Good Friday accord, there will be absolutely no chance of a U.S.-U.K. trade agreement passing the Congress#Brexitpic.twitter.com/ZoEvjYOJl7

She added that “if the UK violates that international treaty” and Brexit ends up undermining the Good Friday peace accord, there will be “absolutely no chance” of a US-UK trade agreement passing the US Congress.

The explosive admission about the new Internal Market Bill was made by British government officials on Tuesday, triggering international scorn. The London-appointed Northern Ireland secretary Brandon Lewis said the proposals would indeed break international law in a “very specific and limited way.”

The “limited” scale of the law violation has apparently not reassured other parties in the UK-EU divorce saga. EU Commission boss Ursula von der Leyen said that such tricky legal moves “break international law and undermines trust,” warning that the controversial bill might throw London’s trade talks with the bloc under the bus.

Ireland, for its part, said it perceived the admission as a threat from London, with its deputy Prime Minister Leo Varadkar branding the revelation as a “kamikaze” statement.