Amid mounting pressure from the government, the Pentagon could soon be forced to discuss its oft-denied, highly secretive UFO hunter operations publicly and on a biannual basis. 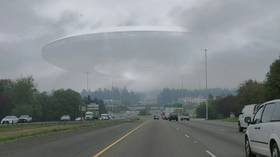 The Pentagon previously claimed it had disbanded its UFO-hunting Advanced Aerospace Threat Identification Programme (AATIP), run by the Defence Intelligence Agency from 2007 to 2012.

However, the existence of an Unidentified Aerial Phenomenon Task Force (UAPTF) run by the Office of Naval Intelligence, whose aim is “to standardize collection and reporting” of “unidentified aerial phenomenon,” was revealed in a Senate 2021 intelligence authorization bill in June.

The bill passed the House on Thursday and has now moved on to the Senate. If approved there, the UAPTF could be forced to issue a public report on UFO sightings every six months.

The program is not classified but deals with classified material and several alumni have spoken out, including its former director, Luis Elizondo, who resigned in October 2017 after 10 years with the program. Elizondo is reportedly convinced that extraterrestrial objects of undetermined origin have crashed on Earth and he is not alone.

“After looking into this, I came to the conclusion that there were reports — some were substantive, some not so substantive — that there were actual materials that the government and the private sector had in their possession,” former Senate Majority Leader Harry Reid said, calling for more transparency.

I’m glad the Pentagon is finally releasing this footage, but it only scratches the surface of research and materials available. The U.S. needs to take a serious, scientific look at this and any potential national security implications. The American people deserve to be informed. https://t.co/1XNduvmP0u

Astrophysicist Eric W. Davis claims he worked as a consultant with the program, and when discussing some of the technology he had seen, he bluntly declared to the media, “We couldn’t make it ourselves.”

Senator Marco Rubio, the Florida Republican who is the acting chairman of the Senate Select Committee on Intelligence, agrees and has also called for more transparency from the program, though he appears to be more preoccupied with ongoing reports of unidentified aircraft over American military bases than with aliens.

Rubio previously stated concerns that US rivals China or Russia had made “some technological leap” that “allows them to conduct this sort of activity.”

“Maybe there is a completely, sort of, boring explanation for it. But we need to find out,” he added.

If the bill passes, the Pentagon will have 180 days to submit a report to the congressional committees. The document demands it be “submitted in unclassified form,” but it “may include a classified annex.”