The OPW said it was hopeful the €800,000 plus refurbishment would be completed by the end of July.

THE FAMOUS GATES of the Phoenix Park are set to be rehung this summer nearly three years after they were first taken down for Pope Francis.

The Office of Public Works (OPW) said the project had been delayed by the Covid-19 pandemic but that they were now hopeful the €800,000 plus refurbishment would be completed by the end of July.

The gates were removed at the time of Pope Francis’ open-air mass in the park in August of 2018.

At the time, the OPW decided they would take the opportunity to refurbish and repaint the gates, as well as carry out essential repairs to the pillars.

However, the project has repeatedly run behind deadline with a completion date of September 2020 missed and further delays due to Covid-19 lockdowns.

In an information note, the OPW said their original plan had been to hire a company to carry out the work on the gates and railings.

This contract was subsequently awarded to a specialist firm Bushy Park Ironworks, who have previously restored historic gates and railings for the Shelbourne Hotel and Blackrock College.

A second contract was then to be awarded to a new contractor to rehang the gates, carry out the necessary stonework, and manage the expected traffic chaos from temporary gate closures.

However, the OPW said because of the massive fall in traffic volume due to the Covid-19 pandemic, the same company had been asked to complete all of the contracts. 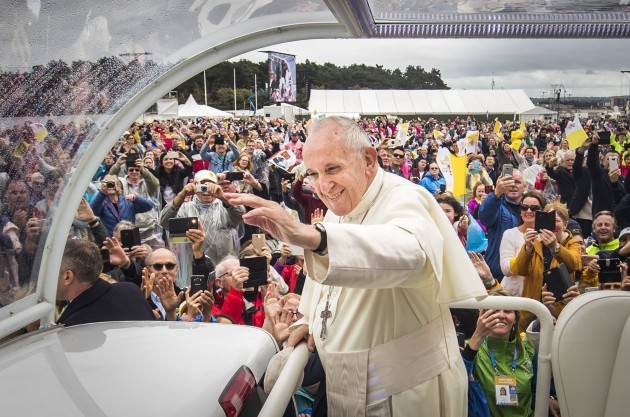 Pope Francis arriving to attend the closing Mass at the World Meeting of Families at Phoenix Park in Dublin, as part of his visit to Ireland.

An information note said this would be “more time efficient and cost effective” and that the traffic management now involved would be nowhere near as complicated with much lower levels of through-traffic in the park.

The OPW said that works to the Knockmaroon Gates had already been completed in situ and had been finished in August of last year.

They were also able to rehang the North Circular Road gates in December 2020, after a full restoration.

There are five more sets of gates to be returned at Castleknock, Chapelizod, Blackhorse Avenue, Cabra, and Islandbridge, the OPW said.

A spokeswoman said: “Works on the rehanging of the remaining gates have been paused since the start of 2021 due to current Covid-19 restrictions.

“However, following a reassessment of the required works to repair the gate structures, those works have been deemed to be essential repair and maintenance of infrastructure.

“Planning for the resumption of those works and the rehanging of the gates, as soon as possible, is underway.”

The spokeswoman said costs on the project so far and amounted to around €800,000 and were “still within” the approved budget.