NEARLY FOUR YEARS after it was recommended and amid Covid-19 delays, plans are underway for Ireland’s first mother and baby mental health unit.

This in-patient unit would be located in St Vincent’s University Hospital in Dublin to accommodate women experiencing severe mental health difficulties during pregnancy or after the birth of their child.

Currently, women in these situations are admitted to a general psychiatric ward where they are not able to remain with their babies.

Mothers would be able to stay with their babies, usually in the same room, during their time in the specialist unit.

The recommendation to put a unit like this in place was included in the Specialist Perinatal Mental Health Model of Care launched by the HSE in late 2017.

This model contains a ‘hub and spoke’ approach, which links different hospitals together to ensure specialist perinatal services are available across the country.

Perinatal refers to any time from conception up to around a year after birth.

Dr Amir Niazi, the HSE National Clinical Adviser and Group Lead for Mental Health, said the mother and baby unit is the “final piece” of the approach.

“The hub and spoke model will be filled this year and that will allow us to move to the next phase with the mother and baby unit,” Dr Niazi told The Journal.

The 2017 report recommended the development of a mother and baby unit in Dublin to serve as a national referral unit for new and expectant mothers.

The report said there are adverse effects on separating mothers from their babies.

It estimated that in 2016, 40-60 women would potentially have benefitted from admission to a mother and baby unit.

“A six-bedded mother and baby unit could accommodate at least 60 admissions per year with a mean length stay of five weeks per woman,” the report said.

A more recent HSE document on this unit said the average stay would be eight weeks, with some people staying for a couple of weeks and some for a few months.

The unit would have six beds with capacity to expand to ten if needed. It is intended to be based in the psychiatric unit at St Vincent’s University Hospital in Dublin, the site recommended in the 2017 report.

Krysia Lynch, chair of the Association for Improvements in the Maternity Services – Ireland (AIMS), said she has been disappointed “for some time” that there is no specialist unit like this in Ireland.

“I’m disappointed to hear that it’s going to be so long [before it is in place]because the recommendation and the commitment was given in 2017 and this is 2021,” she told The Journal.

“It’s already been four years and we are talking simply about a series of rooms where mothers and babies can be accommodated together and receive specialised care for [the mother’s]mental health issues.”

She said although a national unit is welcome, it would be “difficult” for families living outside the capital to visit the mothers and their babies while they are receiving treatment.

“People in general are disappointed with the lack of progress with respect to perinatal mental health,” Lynch said.

“Most of the people that would contact us would be people who do not necessarily have specialist issues, but would be concerned that their low-grade mental health problem would accelerate to the point that they would need specialist care,” she said.

If this occurs at the moment, they would be separated from their baby during treatment in a general psychiatric ward.

She said this issue is “something we would’ve hoped would have been resolved a good time ago” and said mother and baby units are “commonplace” in Britain.

There are more than 20 units like this in Britain, according to the Maternal Mental Health Alliance charity, but there are none in Northern Ireland.

Sinn Féin TD Mark Ward has previously said it is “unacceptable” that no specialist mother and baby unit exists in Ireland.

“We must have a Specialist Perinatal Mental Health Service that is fit for purpose and free to act in the best interests of women’s health,” he said in a statement earlier this month.

Who can avail of the unit?

The HSE said up to one in five women have mental health problems during pregnancy or after birth.

The mother and baby unit will specialise in treating severe mental health problems including bipolar affective disorder, schizophrenia and psychotic illnesses. It will also cover the treatment of severe depression or anxiety disorders.

The HSE said the unit will not admit women with severe personality disorders, learning disabilities or substance misuse, unless they also have a serious mental illness.

It will also not admit women showing aggressive behaviour that could pose a risk of harm or injury to their baby or to other babies in the unit, along with women unlikely to be able to care for a baby relatively independently or women who require an assessment of their ability to be a parent but who don’t need treatment for a serious or complex mental illness.

Treatments available would include medication, group therapies and psychological therapies including cognitive behavioural therapy. There would also be optional activities like cooking, baby massage and arts and crafts.

Under the model of care, perinatal specialist services are aligned to different hospital groups with 19 maternity services included in the model – six hospital ‘hubs’ and 13 ‘spokes’.

The HSE said 54 out of the 67 required job positions are in place at the hub sites, along with 12 out of the 13 perinatal mental health midwives.

12 of the 13 spoke mental health midwives are also in place, with just the Midland Regional Hospital Portlaoise remaining unstaffed. The HSE said “work is continuing to find a solution for this area”. 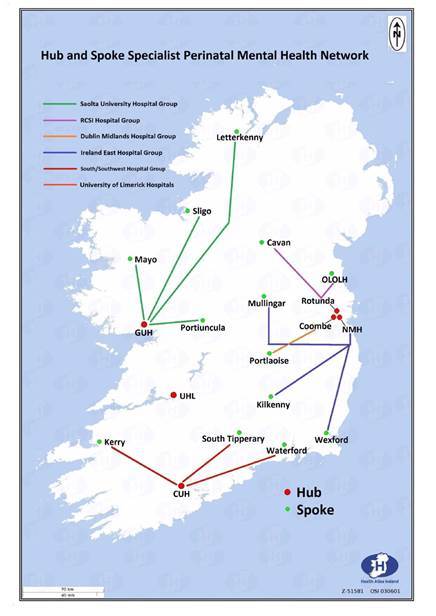 The hub and spoke plan under the HSE’s perinatal mental health model of care.

Dr Amir Niazi said the “final step” within the ‘hub and spoke’ plan is “having a mother and baby unit”.

Asked about a timeline for when this unit could be in place, Dr Niazi did not give an estimate but said it would “definitely” be sooner than five years from now.

“We were making progress before Covid started, but since Covid started all meetings went by Zoom, services pulled back and focused on Covid,” he said.

He said there is no specific funding yet available for the unit, but it will be submitted for funding under the mental health portion of the 2022 Budget.

Mental Health Services received €38 million in the 2021 Budget, which Dr Niazi said “helped us ease through the recruitment process” for the model.

“We know that most of the patients are treated in general psychiatric wards or in gynaecological wards as well as getting some kind of liaison service, which is not ideal,” he said.

“If we have a [specialised]unit, we think it will give us much better quality of service on both sides.”