The New York Times was taken to the woodshed after suggesting the Big Apple’s official seal features a noose, with netizens rushing to inform the newspaper that the object in question is, in fact, an antiquated measuring device. 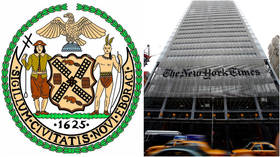 In a report published on Monday, the Times noted that New York’s emblem is facing “scrutiny” and could soon see a facelift, citing its “cartoonish” depiction of a Native American man in a loincloth alongside an early American settler. While the paper accurately described some of the seal’s symbolism – observing that beavers on the emblem represent the fur trade, for example – the Times apparently had a harder time interpreting the settler, who is seen holding an object in his right hand.

“The seal also features an early American settler holding a rope with what appears to be a loop on its end,” the Times wrote in a photo caption – implying there is some mystery as to what the device could be – adding: “The official New York City website describes the rope as a tool used to measure the depth of water.”

Later in the story, the paper also informed its readers that “in some depictions of the seal, the loop looks more like a stone” – apparently struggling to grasp that the “loop” is not a “loop” at all, but a plummet, or a weight used to measure the depth of water, precisely as the city’s website described.

Times editor Cliff Levy – previously the paper’s Moscow bureau chief – was also seemingly baffled by the outdated technology, tweeting out the article with a caption describing the device as a “long rope with a loop on its end,” again implying something more nefarious.

This ratio is going to be a pleasure to watch.“Assistant Managing Editor,” doesn’t bother to look up what a depth finder looks like.

Netizens have since taken note of the blunder, with some unsparing in their correction of America’s ‘newspaper of record.’

the seal depicts a Dutch sailor holding a plummet. the New York Times, however, sees a noose. it doesn’t say as much out loud, but it definitely tries to lead its readers there. 2/ pic.twitter.com/eCxGSNwCx9

It’s called a “lead line.” It’s used to measure depth in fathoms. Historical descriptions of the seal have always referred to the figure on the left as a SAILOR. An “analyst” would know that! pic.twitter.com/1HJ2wSfnXJ

With a virtually endless stream of racialized scandals in recent months, some commenters incorporated previous controversies while mocking the Times’ latest attempt to stir the pot – citing a recent noose-related incident linked to NASCAR racer Bubba Wallace, as well as a row over a T-shirt put out by Donald Trump’s re-election campaign, which critics said featured a “Nazi eagle.”

Don’t forget what looks to be a Nazi eagle at the top of the seal!

The Times also drew a comparison to a more controversial seal, that of the town of Whitesboro, New York, which depicts a legendary wrestling match between a Native American and the town’s founder, Hugh White. Though the apocryphal bout was a friendly one, according to the town’s local mythos, an older version of that seal did come under criticism and was modified in 1970, following a lawsuit brought by a Native American activist group.

ok they’re screwing with us. there’s no way this last part about the Whitesboro seal was written in earnest. pic.twitter.com/5Pkxc0xxEJ

for reference, this is the Whitesboro seal. it depicts a friendly Indian wrestling match (seriously, read the history). even I know that. it does not show a settler “throttling” a Native American. 5/ pic.twitter.com/SG2PncewLB