UK PM Boris Johnson has indicated that he wouldn’t take part in the Black Lives Matter gesture of “taking the knee” if asked, saying that he doesn’t want people being harassed into doing things they don’t necessarily want to do. 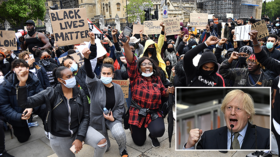 During an interview on LBC radio on Friday, Johnson was questioned on the thorny subject and whether he would follow the example of his main political opponent – Labour’s Keir Starmer – and perform the now-iconic pose if requested.

“I don’t believe in gestures. I believe in substance,” Johnson said, stuttering slightly and looking a little uncomfortable with the question.

When asked whether he would take the knee, Boris Johnson said “I don’t believe in gestures. I believe in substance.” He adds there “are injustices we need to rectify” but “I don’t want people to be bullied into doing things they don’t want to do”#BorisOnLBCpic.twitter.com/c4q5ByI0Jf

The UK PM – who has been accused by critics of being guilty of indulging in racist rhetoric, particularly before entering parliament – claimed that he would rather see “a story of championing success” of young black people.
Pushed on whether he was “a [Dominic] Raab or a [Keir] Starmer” on this issue of taking the knee, Johnson replied:

I don’t want people being bullied into things that they don’t necessarily want to do.

Last month, Raab, the British foreign secretary, revealed on Talkradio that he would refuse to take part in the gesture, insisting that he only kneeled “for two people: the Queen and the missus, when I asked her to marry me.” He was subsequently pilloried for suggesting in the same interview that the pose had originated from the TV drama ‘Game of Thrones.’

A plethora of people, from police to politicians and English Premier League footballers, have ‘taken the knee’ in the last few weeks against a backdrop of protests and riots, sparked by the death of 46-year-old black American George Floyd while in police custody last May.