Law enforcement officers have begun pushing protesters away from Portland’s federal courthouse after demonstrators pulled down a fence surrounding the building. 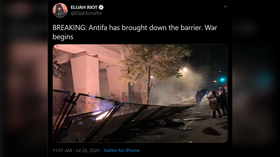 Activists used wire cutters, power saws, and ropes to attack the fence on Saturday night and into the early hours of Sunday morning. Videos show a group of demonstrators rocking the chainlink barrier back and forth, ultimately pulling it down. Projectiles and tear gas flew across the sky, in what one observer described as a scene resembling a battlefield. Several fires were then lit outside the courthouse before police declared a riot and emerged from the building.

BREAKING: Antifa has brought down the barrier. War begins pic.twitter.com/syfPSMA3RJ

BREAKING: rioters have taken fence down at courthouse pic.twitter.com/Jxjv5WulvF

Antifa teens doing it. Rope got the fence down. Cheering and some tear gas deployed. #portlandprotests#PortlandProtestpic.twitter.com/nJxB1Mrl0s

Federal agents then began to fire tear gas into the crowd as they pushed the protesters away from the building. Hundreds of demonstrators remained in the downtown area as they clashed with police.

Portland has divulged into a war zone!Battlefield Antifa hits new extreme Barrier has been destroyed Never seen such force from either side I’ve now been hit by 2 gas canisters and a rubber bullet right to the crotch In pain, absolute chaos pic.twitter.com/HbRTwKNWIP

Antifa teens doing it. Rope got the fence down. Cheering and some tear gas deployed. #portlandprotests#PortlandProtestpic.twitter.com/nJxB1Mrl0s

Daily demonstrations began in Portland nearly two months ago after the death of George Floyd at the hands of the Minneapolis Police in May. The protests have become increasingly violent in recent days. A black Trump supporter was stabbed on Friday night in the city. Activists have blamed the arrival of federal agents earlier this month as the reason for the spike in unrest, alleging that officers from the Department of Homeland Security and other agencies have used excessive force and unlawfully seized and detained individuals.