The murder in broad daylight of Milwaukee’s Bernell Trammell is prompting calls for a federal prosecutor to investigate whether the 60-year-old black man was killed because of his passionate support for President Donald Trump. 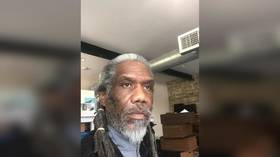 Wisconsin Republican Party Chairman Andrew Hitt asked that US Attorney Matthew Krueger investigate whether the “senseless” killing was politically motivated. Trammel was gunned down around midday Thursday in front of his small publishing business, eXpressions Journal. Police are still looking for the shooter.

“No American should fear for their personal safety because of where they live or their political affiliation,” Hitt said Friday.

Bernell Trammell was shot in the head execution style broad daylight yesterday in front of his store. He was a God fearing Trump supporting man. Was it because he was a Trump supporter? He didn’t look for fights, he lived a good life. Sick and sad! @GovTonyEvers get it together! pic.twitter.com/Y75V7UODZM

Trammell was well known for standing outside his shop or Milwaukee City Hall with handmade signs urging passersby to re-elect Trump in November. He also displayed other signs with religious or anti-violence messages, as well as messages in support of Black Lives Matter.

His death was met with shock in Milwaukee, where he was reportedly remembered for being positive, polite and selfless. Conservatives such as Fox News host Laura Ingraham reacted with outrage.

60 yr. old Bernell Trammell who was known for his conversations on religion and being pro-Trump was shot dead in front of his store 2 days ago. He was described by his community as someone who always help people in need, was selfless and a good listener. pic.twitter.com/f2V3I4PFRh

Turning Point USA founder Charlie Kirk suggested that lack of attention to the gruesome murder showed the hypocrisy of the Black Lives Matter protest movement. “It shouldn’t be dangerous to support the president,” Kirk said on Twitter. “His name was Bernell Trammell. Did his life not matter to BLM Inc.?”

The conservatives’ concerns are not unfounded, as animosity among leftists toward black conservatives is nothing new. Drew Duncomb, a black Trump supporter, said he was stabbed early on Saturday by an “Antifa dude” in Portland who had been following him around. Another black man was assaulted by protesters in Portland on Friday, after standing outside the fence protecting the city’s federal courthouse and calling for calm.

Black conservative activist Candace Owens was attacked in August 2018 by “white liberal thugs“ in Philadelphia, while she was having breakfast with Kirk at a restaurant. “After all these years, white Democrats still believe that they own black people,” Owens said at the time. “When you go against how they desire you to think, they viciously attack you.”