A cyclone of tear gas was spotted in downtown Portland, in what appears to be a bizarre byproduct of the ongoing skirmishes between demonstrators and law enforcement officers. 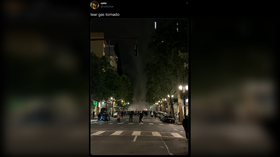 Amid the Portland protests in early Friday, heavy amounts of gas and smoke created a whirlwind in downtown Portland near Chapman Square. pic.twitter.com/bLqgxifUXR

In one video, a large funnel of tear gas can be seen rising from the street, as the narrator remarks: “Unbelievable!”

A photograph of the not-so-natural phenomenon shows the artificial cyclone extending high into the night sky as a crowd gathers around it.

In clashes with law enforcement personnel that lasted into the early hours of Friday morning, demonstrators armed with leaf blowers diverted tear gas being fired by police back towards the federal courthouse. Footage shows the tactic’s surprising success, as large plumes of gas and smoke, meant to dissuade demonstrators from attacking the building, floated back towards federal agents.

With leaf blowers, the protesters appear to be winning this battle with the feds, who have launched an immense amount of tear gas pic.twitter.com/A1D7dVhg0p

Demonstrators have been finding creative ways to combat police in their nightly clashes with law enforcement. In one instance, a protester blasted Star Wars’ iconic ‘Imperial March’ from a loudspeaker as activists and police exchanged projectiles and tear gas in front of the courthouse.