A bag discovered in a park frequented by demonstrators contained Molotov cocktails and several loaded magazines, the Portland Police Bureau (PPB) has reported. Nightly protests in the city have become increasingly violent. 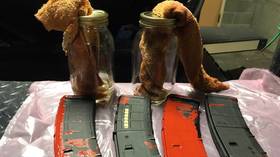 The PPB said they were tipped off about a suspicious bag in Lownsdale Square Park, which is located across the street from the federal courthouse that has been under siege by protesters for nearly two months. The pack reportedly contained loaded rifle magazines and Molotov cocktails. The police force shared a photo of the bag’s contents on Twitter.

Tonight Portland Police were near Lownsdale Square Park. A person pointed out a bag to them. Inside the bag Police found loaded rifle magazines and Molotov cocktails pic.twitter.com/ytpu9pZjqG

Reactions on social media were mixed. While some said the discovery undermines the narrative that the protesters are peaceful, others theorized that the weaponry had been planted in order to discredit the demonstrators. One reply suggested that police bodycam footage related to the incident should be released. There has been a steady increase in violent incidents in Portland, as clashes between protesters and law enforcement become more intense.

Earlier on Sunday, police arrested two individuals following gunfire near Lownsdale Park. One person was reportedly transported to the hospital to receive treatment for a non-lethal gunshot wound, according to local media. It’s not clear if the incident was related to the discovery of the bag.

Police and federal agents have been accused of using unlawful tactics and excessive force against protesters, but media outlets and local officials have been less willing to condemn violence carried out by demonstrators. Activists have used fireworks, projectiles, lasers and other weapons to attack law enforcement protecting the city’s federal courthouse, in what has become a nightly ritual that began almost 60 days ago.