The woman dubbed ‘Naked Athena’ is a sex worker, and her famous confrontation with Portland police, in nothing but a cap and a face mask, happened because she felt offended by the way they stood, she has revealed in an interview. 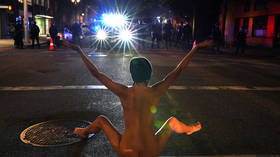 Identifying herself only as Jen, a sex worker in her 30s, the bare protester said she “felt provoked” in a “very deep feminine place in myself” by the city and federal riot police earlier this month, when she decided to strip off and confront them in naught but her skin.

“I looked at them and they stand there with this stance: Feet planted, shoulder width apart, arms at their side, chest up, head high, and it’s a warrior stance… and it’s not earned,” Jen confided to the ‘Unrefined Sophisticates’ podcast over the weekend.

“There wasn’t planning and a lot of thought going into it,” Jen said. She just handed her clothes to her partner, leaving just a beanie and a face mask on, and struck a pose on the street.

It was day 50 of the ongoing siege by demonstrators outside the federal courthouse in Portland, Oregon. One journalist sympathetic to the demonstrators dubbed her “Naked Athena” and a legend was born.

And then? Naked Athena appeared and the little boys didn’t know what to do. pic.twitter.com/Elo69SsV0t

Jen described the confrontation as “really calm and terrifying at the same time,” comparing it to “being in the eye of the storm.” Video and photos from that night show her striking yoga poses and full-frontal-flashing the line of police in riot gear. If one was to trust the media narrative, the presence of “Naked Athena” forced the officers to eventually retreat to the courthouse.

Oregon has lax laws on public nudity, and Portland only makes it illegal to strip “in order to arouse,” rather than, say, express a political opinion.

“My nakedness is political and it is my expression,” the 30-something confessed, adding she is “notoriously naked” often and pretty much anywhere.

Initially billed as peaceful protests against racial injustice after the death of George Floyd in Minnesota, demonstrations in Portland have since morphed into riots, with armored activists repeatedly trying to set fire to the federal courthouse.