A new NASA mission, which could be greenlit next summer, aims to untangle the mysteries of Triton, Neptune’s largest moon. 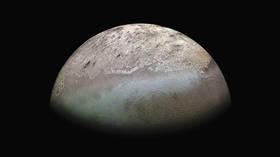 Slightly bigger than the dwarf planet Pluto, Triton is the only large moon in our solar system that orbits in the opposite direction to its planet’s rotation and has a retrograde orbit. But the whimsical nature of this extraterrestrial rock doesn’t stop there – and when NASA’s Voyager 2 flew past Triton on August 25, 1989, a lot of eyebrows were raised.

That was because Voyager 2 revealed that the moon’s surface was home to massive, dark plumes of icy material. This icy landscape appeared to be young, and had been resurfaced over and over with fresh material, raising questions as to how and why.

The implication was that, despite being an ancient moon six times farther from the Sun than Jupiter, Triton was – and is – still active, and potentially home to a vast interior ocean.

Now, a mission dubbed ‘Trident,’ which is one of four competing for selection under NASA’s Discovery Program, wants to discover more about how this celestial body has evolved over time.

In a press release issued on Tuesday, NASA described the mission in more detail. Trident, named after the three-pronged spear carried by the ancient Roman sea god Neptune, aims to discover which factors lead to a solar system body having the necessary ingredients to be habitable.

In this case, it will look into how Triton, thought to have migrated from the Kuiper Belt – a region beyond Neptune, and home to icy bodies left over from the early solar system – managed to form an interior ocean.

Currently, and thanks to the initial Voyager 2 images, we’ve explored only 40 percent of the moon’s surface. This makes Triton the largest unexplored solid surface in the solar system this side of the Kuiper belt. Trident wants to map the remainder.

The mission also hopes to analyse Triton’s atmospheric conditions. The moon has a dynamic and changing climate, and one that’s home to a steady flow of organic material – likely nitrogen – snowing onto the surface.

But it’s Triton’s actual atmosphere that’s most puzzling. Filled with charged particles, according to NASA, it contains a layer known as “the ionosphere” 10 times more active than that of any other moon in the solar system.

This is particularly weird, they note, because ionospheres are generally charged by solar energy – and Triton is 30 times farther from the sun than Earth. This means the moon must have another energy source that’s charging these particles. Trident’s job will be to find out what that may be.

Trident’s third and final goal is to understand how this moon keeps renewing its surface. As well as being strangely young, the moon’s surface also bears almost no visible craters, despite being possibly only 10 million years old in a 4.6-billion-year-old solar system. We don’t know why.

“Triton is weird, but yet relevantly weird, because of the science we can do there,” said Karl Mitchell, Trident project scientist at JPL – NASA’s Jet Propulsion Laboratory. “As we said to NASA in our mission proposal, Triton isn’t just a key to solar system science – it’s a whole keyring.”

Although currently competing against three other mission proposals (with up to two being selected), if Trident gets the green light, its proposed launch date is in October 2025. The launch will take advantage of a once-in-a-13-year window that will use the gravitational pull of Jupiter to slingshot Trident to Triton for a 13-day encounter in 2038.

Although it seems a long time away, the 13-day encounter is an incredibly precocious plan. It takes Neptune 165 Earth years to orbit the sun, so if Trident doesn’t arrive by 2040, it will take over a hundred years for us to be able to analyse it in such a way again.