Is Vladimir Putin “the most dangerous man in the world?” If you trust the same news sources that some British schoolchildren’s teachers do, then yes. Perhaps it’s a good thing that the kids aren’t listening. 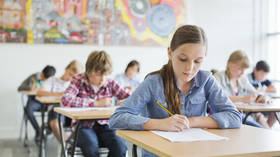 When schools in Britain eventually reopen in September, children filling into the classrooms won’t just be learning their reading, writing and arithmetic. On top of these fundamentals, their teachers will spoon-feed them blatant propaganda that would make Herr Goebbels blush.

The propaganda source in question is The Day, a news site founded by a team of established journalists and directed at teens. Designed for use in the classroom, each of The Day’s stories is presented alongside a range of thought-provoking questions and exercises to help young people learn to “think for themselves and engage with the world.”

Though UK-focused, The Day is used in classrooms around the world as a teaching aid.

A recent article describes Russian President Vladimir Putin as “the most dangerous man in the world” and suggests “nothing can be done to bring this rogue state [Russia] to heel.” Moscow’s entire foreign policy is “shameless” and Putin is described as a man who delights in stoking unrest in the West. The widely-debunked accusations of Russian interference into the 2016 US election are treated as fact, as are the rumors that Putin meddled in the UK’s Brexit referendum and in last year’s general election.

The children are also offered Bill Browder’s opinion that Russia is a “mafia state running a mafia operation.” Browder, the site omits, is a magnate and fraudster who made billions of dollars in Russia during the privatization rush of the 1990s and reinvented himself as an anti-Putin activist once his revenue stream was cut off.

Below the article, kids are asked to answer a number of questions, such as “Should Russia be expelled from the United Nations?” and even to write a creative story about what it would be like to meet Putin during his KGB days. For good measure, the New York Times’ recent evidence-free and widely criticized story claiming Russia paid bounties to the Taliban to kill US troops in Afghanistan is suggested as further reading to help kids become an “expert” on all things Putin.

The Day does not bill itself as an anti-Russia think tank for kids. Quite the opposite. Ironically, its founder, Richard Addis, wanted to set up the site to fight deceptive journalism, hoaxes, “slanted reporting” and “stories where the truth is contentious” — fake news in other words.

He was supported in this quest by the British government’s Commission on Fake News and the Teaching of Critical Literacy Skills in Schools, which partnered with The Day to compile a damning report in 2018, revealing that only two percent of British youngsters have the critical thinking skills to spot phony news.

“It is clear that our schools are absolutely vital in encouraging children to burrow through the rubbish and rootle out the truth,” Addis said at the time. Stories on the site with titles like ‘Putin the terrible’ and ‘Toxic Putin on mission to poison the West’ are clearly what Addis considers balanced journalism.

Balance, however, is not a common trait among British Russia-watchers. Parliament’s long-awaited ‘Russia report’ relies almost wholesale on “allegations” to back up its claim that Moscow “poses a significant threat to the UK.” The report even relies on articles by BuzzFeed to substantiate its shaky claims.

As slanted as its coverage is, The Day’s message may fall on deaf ears. According to the same government report, only a quarter of older children actually trust the news they read online. As such, The Day’s propagandizing might all be in vain.