Two people were injured in a chaotic incident when an armed protester attempted to fire at a car as it drove through a demonstration on I-225 highway in Colorado, but ended up missing and shooting another participant in the leg. 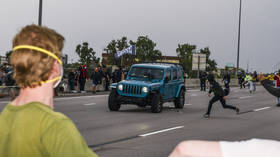 Several hundred people obstructed the busy road on Saturday afternoon as they marched in memory of 23-year-old local black man Elijah McClain, who was killed by police last year. As the police were trying to reroute traffic, one jeep surged through the crowd.

Here’s what the TV news helicopter captured re: Jeep driving through protest pic.twitter.com/sRWxc8OrAu

“While the protestors were walking on I-225, a vehicle decided to drive through the crowd. A protestor decided to fire off a weapon, striking at least 1 other protestor,” Aurora Police Department police wrote in a tweet.

Someone else showed up to the hospital with a graze wound.The vehicle was towed and we are investigating that incident.Any witnesses to the shooting are urged to call @CrimeStoppersCO. pic.twitter.com/Mxm6LyXtu0

The victim was transported to the clinic in a stable condition, while another person who was apparently injured in the incident “showed up to the hospital with a graze wound.” The driver was detained and police are investigating the shooting.

Protesters have since left the interstate, but continue to block other roads elsewhere in the city, with Aurora police warning motorists to seek alternative routes, expect delays and exercise extreme caution as “there may still be people walking on the roadways.”