The US National Hurricane Center (NHC) has warned that Hurricane Teddy is expected to intensify further, potentially becoming a catastrophic and life-threatening Category 4 cyclone by Thursday. 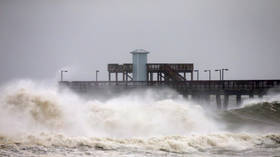 Teddy is currently classified as a Category 2 hurricane and is located roughly 820 miles (1,315 km) east of the Lesser Antilles archipelago in the southeastern Caribbean. It boasts sustained winds of 100 miles per hour (155 km/h), and is moving at a speed of approximately 12 mph (19 km/h).

Teddy is now the eighth hurricane in what was forecast to be a particularly active season. Only three previous hurricane seasons have produced eight hurricanes by September 16 – 1893, 2005 and 2012.

There have been 20 named storms so far in 2020, compared with 12 for the average season, and there are currently five simultaneous tropical cyclones in the Atlantic for only the second time in recorded history – the last time was in 1971.

In fact, there have been so many storms that the NHC may be forced to use the Greek alphabet to name upcoming storms for only the second time in history, as it is expected to run out of names once Storm Wilfred forms.

Gulf Breeze, Wednesday 1am. Sustained winds and gusts stronger. Rain heavy and steady. Looking more like an eastern eyewall hit for the Pensacola/Gulf Breeze/Navarre area. Next update after I get some sleep #HurricaneSally2020#HurricaneSally#Sally#[email protected]/CPNkF4hfBd

Hurricane Paulette made landfall in Bermuda on Monday and is expected to strengthen as it heads out into the open Atlantic, where it could gain major hurricane status – the second to do so this season. There are, on average, three major hurricanes per season in the Atlantic.