Protesters wreaked havoc in downtown Seattle, erecting barricades and setting them on fire to block police from moving in. Violence erupted in the heart of the former ‘autonomous zone’ created by Black Lives Matter protesters. 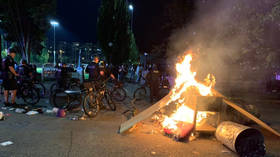 At least seven people were arrested after a Black Lives Matter protest in Seattle turned violent on Saturday night, and saw activists storming a boarded store and vandalizing businesses and Seattle City Hall with graffiti.

Footage emerged showing masked protesters spray painting “Kill Pigs” and “Kill SPD [Seattle Police Department]” on the walls of the building that hosts the mayor’s office and the city council.

One video shows a protester attempting to ram City Hall with a bicycle, while masked activists dressed predominantly in black can be seen drawing anarchist symbols on the walls with spray paint.

SPD reported that “protestors have wound their way through the city causing damage along the way,” releasing a photo of smashed windows in a coffee shop at the Columbia Center in downtown Seattle.

The fire has been extinguished and @SeattleFire is clearing the scene.

Vandals were filmed breaking into and looting an Amazon store despite its boarded-up storefront.

Black Lives Matter and Antifa militants have broken into a boarded up Amazon store and are looting it in Seattle. Reparations? pic.twitter.com/2LsD7RPYxH

Protesters ignited barricades on Capitol Hill, reminiscent of the woebegone days of the ‘Capitol Hill Autonomous Zone’ or ‘CHAZ’ (later renamed ‘CHOP’), which lasted for three weeks before widespread violence forced the authorities to intervene and dismantle it on July 1.

The self-declared ‘autonomous zone’ sprang up following nationwide protests over the killing of Minneapolis, Minnesota resident George Floyd, who died while in police custody. Demonstrators sealed off several streets near the police’s East Precinct after law enforcement abandoned the building. Although initially praised for its festive mood, the area quickly descended into anarchy, with crime and violence becoming especially bad at night.

Antifa Arsonists are building another large fire in the street. #seattleprotestspic.twitter.com/BRQmy3NKF9

As police moved in to raze its lookalike, they were pelted with projectiles.

CHAOS IN #SEATTLE — ROCKS THROWN AT POLICE AS CROWDS ARE FORCED TO MOVE BACK pic.twitter.com/jxpYViyR7X

“Crowd has also begun throwing bottles and rocks at officers,” SPD tweeted shortly after it ordered the protesters to disperse.

Police eventually succeeded in scattering the crowds and putting out the fires, saying that the arrests were made in connection with “assaults and property damage.”