Vera Pauw’s side will play a friendly double-header next month with focus switching to the 2023 World Cup qualification campaign.

THE WHEELS WERE set in motion this morning for the beginning of a new chapter. 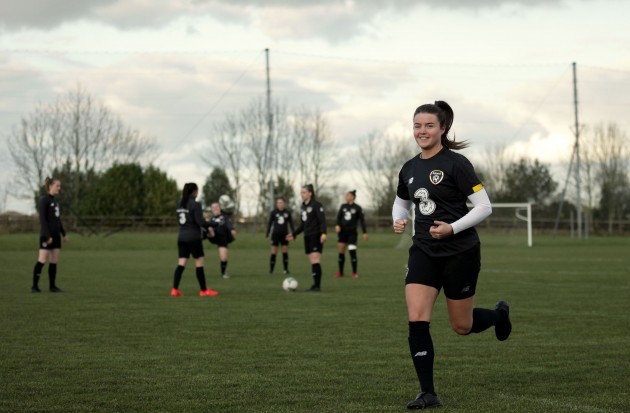 Clare Shine is among the returning faces.

A double-header of friendlies was announced for next month as Vera Pauw’s Ireland gear up for a new campaign. The heartbreak of the last one still lingers — how agonisingly close they came to Euro 2021 qualification. But it’s in the past.

“There’s been too many hard luck stories,” as Áine O’Gorman said earlier week. “It’s long overdue to take that next step and qualify for a first major tournament.”

And so, the 2023 World Cup qualification campaign edges ever closer.

This morning, the FAI confirmed that the Girls In Green will host Denmark in Tallaght Stadium on Thursday, 8 April, before flying out to face Belgium in Brussels’ King Baudouin Stadium on Sunday, 11 April.

With the World Cup qualification draw pencilled in for 30 April, these clashes are most welcome as the squad reconvene for the first time since the Germany defeat before Christmas.

A much-needed test to gauge where they’re at, Ireland are ranked 31st in the world with Denmark 14th and Belgium 17th. “These games will make a significant difference to our preparation for the 2023 World Cup qualifiers, due to start in September,” Pauw said, while announcing a provisional squad of 32.

It’s a strong one with serious quality throughout, that’s for sure, and is pretty much as expected. Two names that jump out are Clare Shine and Stephanie Roche, a pair of returning faces among the forwards.

The difference one year can make, hard graft and a continuously improving mindset @ClareShine01 👏🏻🤩 https://t.co/A4idiDulHx

Shine’s inclusion, in particular, has been met with much acclaim social media; the Glasgow City striker’s return coming after a difficult period off the pitch with depression. The Cork native spoke about her mental health struggles publicly last January, and has documented her journey back from the brink on social media of late. Having suffered a setback last June, Shine seems to be back playing with a smile on her face.

“Another week in sobriety, a life long journey. Grateful,” she tweeted on Sunday.

This landmark return to the squad is about much more than football.

Roche, on the other hand, also has the chance to battle into contention and get back on board, having been cut from provisional squads of late. Her first season back at Peamount United in 2020 was a “slow burner,” as she said herself after the FAI Cup final in December, injury setbacks hampering her progress. But her stunning individual display that day, and two well-taken goals, seem to have impressed Pauw.

She’s one of 10 Women’s National League [WNL] players called up, the strong domestic representation certainly a boost ahead of the league’s kick-off this weekend. 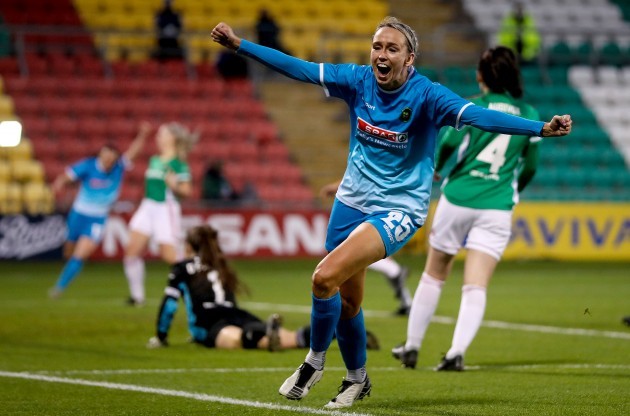 Goalkeeper Niamh Reid Burke, and defensive duo Claire Walsh and O’Gorman are Roche’s double-winning team-mates involved, with four also there from Shelbourne. Saoirse Noonan is the name interesting many, the Cork ace having recently switched to the Reds, with Emily Whelan, Jamie Finn and Jessica Ziu joining her.

Moving to the Women’s Super League [WSL] — England’s top-flight — seven of the 10 Irish internationals on the books there are included. Two goalkeepers in Grace Moloney and Courtney Brosnan — the former likely to take the number one jersey following her efforts against Germany and stunning exploits with Reading — and then captain Katie McCabe, Megan Connolly, Ruesha Littlejohn, Rianna Jarrett and Leanne Kiernan.

Kiernan’s return is another welcome one, a devastating injury ruling West Ham’s Cavan talent out of the last camp. “If we played her, we could destroy her career,” Pauw said at the time, with the hamstring issue keeping her out of club action of late too.

Harriet Scott, Megan Campbell and Tyler Toland are the WSL absentees, though Toland — who has been in the international wilderness of late is on a season-long loan at Glasgow City from Manchester City.

The four other Scottish-based players are included — Shine and Glasgow team-mate Niamh Farrelly, and Celtic duo Keeva Keenan and Izzy Atkinson (Farrelly moved from Peamount, and Atkinson from Shels in the off-season).

Three from the US — Denise O’Sullivan and Diane Caldwell from National Women’s Soccer League [NWSL] side North Carolina Courage, and Heather Payne from Florida State University. Two from Germany — Amber Barrett and Claire O’Riordan — and one a-piece from Portugal, Italy and Denmark in Marie Hourihan, Louise Quinn and Kyra Carusa — US-born like Alli Murphy — respectively.

The squad, of course, will be narrowed down before the double-header, but it’s great to see the wheels in motion, and preparations ramping up ahead of the next chapter.

After so many near misses, the time is most certainly now for this special group to make history. 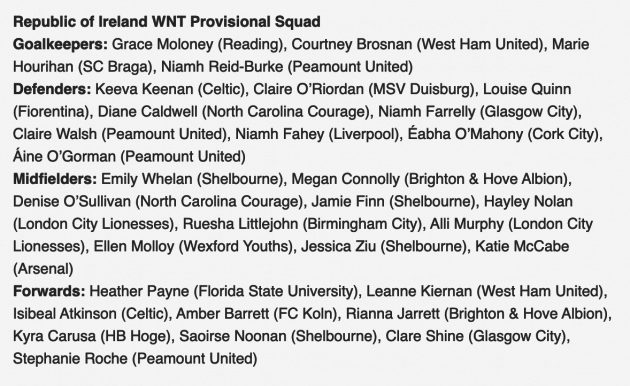