The government’s five-year plan is set to be launched later today.

GOVERNMENT PLANS FOR the development of rural areas includes schemes to turn vacant properties into remote working hubs and to use pubs as community spaces.

Being launched this afternoon, the government’s Our Rural Future plan features 150 commitments is set to will run from 2021-2025.

Among the proposals seen are extensive plans to promote remote working and to increase the number of people living in rural areas.

Proposals in Budget 2022 could even see “new financial supports” to encourage people to live in rural areas.

This will also include plans to see an increase in public sector workers doing their jobs from rural areas, with pilot “co-working and hot-desking hubs” for public servants in a number of rural towns.

The government has pledged a move to 20% home or remote working in the public sector this year, with further annual increases over the five years of the plan.

The proposals are underpinned by the continued roll-out of the National Broadband Plan (NBP), with the new strategy noting that the government will explore how the NBP “can be accelerated to deliver connectivity as soon as possible to rural areas”.

The plan says that these facilities will support the retention of skilled people in rural areas as well as attracting “mobile talent” to rural areas. Local authorities will be provided with funding to market their areas to remote workers.

There is also to be an examination of whether “specific incentives” would encourage remote workers to relocate to rural towns.

The plan pledges “significant” investment in remote working to allow people to live and work in rural communities “regardless of where their employer is headquartered”.

The government has previously promised legislation to give employees the right to request remote working and it is also committing to a review of tax arrangements for remote working for both employers and employees.

Planning changes would also be enacted to extend regulations allowing certain vacant commercial premises to change their use for residential purposes.

Other proposals include plans to:

The Our Rural Future plan was launched this afternoon by Taoiseach Micheál Martin, Tánaiste and Business Minister Leo Varadkar and Minister for Social Protection and Rural and Community Development Heather Humphreys.

Speaking at the announcement, Humphreys said that the country needed to “move away from the tired narrative of rural versus urban”.

We are interdependent. This policy is about achieving balanced regional development in a way that benefits everybody. If people are to make the move back to rural Ireland, we want to ensure that they are returning to vibrant towns and villages, through a new town centre first approach, we will target investment to ensure rural towns and villages are vibrant and lived in places.

“The National Broadband Plan is a largest ever investment in rural Ireland, akin to electrification, it will open up a new world of possibilities,” the minister added.

The Taoiseach also also said the he rejects the idea that there is a choice between rural and urban communities.

Throughout our history, and through much of our literature, you can find an idea that the interests of rural and urban communities stand in opposition to each other, that there is some choice to be made between the traditional and the modern. That one defines our past and the other our future. We reject this idea, our country’s future must seek to sustain and build strong communities in all parts of our country.

Martin has said that the rural population is not dwindling and “has actually increased for the first time since the famine”.

“If you use the definition often used in other countries of defining rural living as living in the countryside or a town of up to 10,000 people, more than half of Irish people live in rural communities, in stark contrast to the idea of a disappearing world over the last 20 years,” he said.

Varadkar said that the Covid-19 pandemic “has restored our appreciation of space and of rural places”.

I believe that when the pandemic is over many of us will return to the office, and might be glad to do so. But things will never be the same again. Blended working will become the norm, that will mean less commuting, more time for family and leisure and fewer greenhouse gas emissions from transport. New job opportunities will be created for people who want to live in rural Ireland, and new businesses will find it easier to establish and grow. 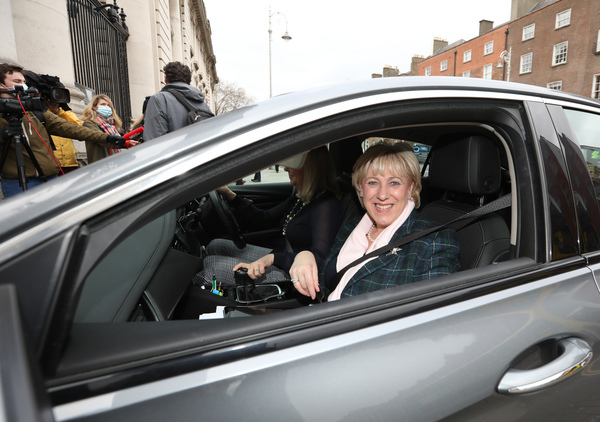 Early reports of the plan have been broadly welcomed but some politicians have pointed to the importance of delivery of the NDP in particular.

Roscommon-Galway TD and chair of the Oireachtas Rural Affairs Committee Denis Naughten said that “if delivered” the plan will “give families a real option of living in their own home in a rural community”.

“The key challenge remains the implementation of the government plan by the Dublin decision makers,” he said.

If this plan is not held at the centre of government as the starting point for all policy proposals then it will just be an afterthought with some ill-conceived measure bolted on to the end of the newest government strategy or action plan that will fail to achieve the well intentioned goals set out in the Rural Future plan.

Wicklow Social Democrats TD Jennifer Whitmore has said that childcare must form part of the plans for an increase in remote working.

“For many rural families, poor access to childcare is another barrier to employment, particularly for women wanting to return to the workforce,” she said.

“That is why I believe the government needs to consider the provision of drop-in childcare facilities in tandem with the working hubs proposed under the plan. Such a model could operate similar to creche facilities in shopping centres, where parents have the option of dropping their children off on an hourly basis while they work at the hubs.”