The New York Times is doubling down on claims that Russia offered bounties for the killing of US troops in Afghanistan, but now says local criminals and not the Taliban were the recipients, again offering no actual evidence. 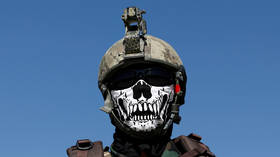 The new article, published Tuesday, says that “electronic data showing large financial transfers from a bank account controlled by Russia’s military intelligence agency to a Taliban-linked account” was intercepted by US spies and “bolsters suspicions” that Russia offered bounties to militants – as claimed by the Times last week.

Once again, the Times quotes anonymous sources – “three officials familiar with the intelligence” – so the claim is impossible to verify. No evidence of the alleged electronic transfer is provided, only a third-hand hearsay that “analysts concluded from other intelligence that the transfers were most likely part of a bounty program.”

The article eventually gets around to quoting several local officials from Afghanistan, who say that several people who transfer money through an Islamic banking system are “suspected of being part of a ring of middlemen” between Russia and “Taliban-linked militants.”

The ‘hawala’ banking system does not actually use electronic transfers. Moreover, the article says the Afghan security forces found “a half-million dollars” – presumably in cash – in one Kabul home about six months ago. Safiullah Amiry, described as “the deputy provincial council chief” in Kunduz, “said the Afghan intelligence agency had told him the raids were related to Russian money being dispersed [sic]to militants.”

In the original article, the Times claimed President Donald Trump had been briefed on this alleged plot sometime in March. The White House, the CIA and the Office of the Director of National Intelligence have since denied this.

So the narrative has now shifted, with the Times citing “two officials” who say the information was included in Trump’s written presidential daily brief (PDB) “in late February,” accompanied by the – likewise unverified – claim that Trump typically doesn’t read those. The article also claims the CIA mentioned the intelligence in its World Intelligence Review newsletter, also known as The Wire, dated May 4.

The identity of the suspected recipients of the “Russian bounties” has shifted as well, from the Taliban to “criminals closely associated with the Taliban” – according to yet another anonymous US official.

Most mainstream US media outlets and the Democrats have taken the original New York Times reporting at face value, denouncing Trump as “Putin’s puppet” and a traitor for allegedly not doing anything to “punish Russia” based on the purported intelligence assessments, rather than demanding to see evidence there was anything to it.

White House press secretary Kayleigh McEnany:”The president does read [the PDB]and he also consumes intelligence verbally. This president, I’ll tell you, is the most informed person on planet Earth when it comes to the threats that we face.” pic.twitter.com/Y6jzzShyJX

Speaking with reporters on Tuesday afternoon, White House press secretary Kayleigh McEnany rejected the insinuations that Trump does not read the daily briefings, and said that he was briefed on what’s in “public domain” after the Times published its story. In CNN’s interpretation, that became “Trump has now been briefed on what was in his daily written intelligence briefing back in February.”

The White House says Trump has now been briefed on what was in his daily written intelligence briefing back in February, per the NYT.