Pranksters Vovan and Lexus released a conversation in which Monica Lewinsky imparted her words of wisdom to ‘Greta Thunberg’, believing she was talking to the climate change warrior who was eager to learn from her experience. 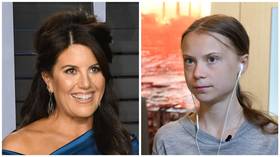 Unlike Greta Thunberg, Monica Lewinsky is largely out of the headlines these days. Russian YouTube pranksters Vladimir Kuznetsov and Alexey Stolyarov (better known as Vovan and Lexus), tried to drum up a little publicity for the renowned former White House staffer, calling her to find out how she’s doing.

During the call, the pranksters pretended to be the famous Swedish teenager (and her father) seeking to join some of Lewinsky’s “youth projects all over the world.”

“I think it would be powerful, a little bit provocative!” was Lewinsky’s reply. “You and I have something in common, Greta. It is, unfortunately, the bullying, the public bullying.”

The fake Greta said she is indeed frequently bullied online, and Lewinsky replied that it was her family who helped her recover after being ostracized by the public. She then passionately expanded on how to cope with the attacks and offensive language on Twitter, offering to “find someone” working at the company who can set up filters.

Vovan and Lexus then tried to take the chat in a more political direction but to no avail. “I don’t give many interviews, I really try to keep away from politics,” Lewinsky explained, revealing that her activism is criticized “from both sides of the aisle, from Democrats, independents and Republicans.”

It wasn’t immediately clear when the conversation took place, but Vovan and Lexus themselves told Russian media the call was a sort of “gift” for Lewinsky, who they called an “interesting personality.”

Lewinsky is the latest public figure to fall victim to the prankster duo. That list includes Oscar-winning ‘Joker’ actor Joaquin Phoenix, as well as US Representative Maxine Waters and Senator Bernie Sanders. 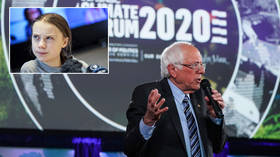 Share. Twitter Facebook Google+ Pinterest LinkedIn Tumblr Email
Previous ArticleLionel Messi’s dad set to move to Milan.. sparking yet more Inter transfer talk for Barcelona star
Next Article How Chelsea should line up vs Wolves with James in midfield ahead of Kante for finale to qualify for Champions League