A 39-year-old man, who had already been detained, questioned and released by French police, was brought into pre-trial custody again, having admitted to starting fires at the 15th-century cathedral in the western city of Nantes. 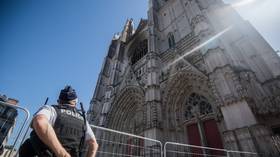 The impressive Nantes Cathedral of St. Peter and St. Paul fell victim to a blaze back on July 18, with several fire brigades scrambled to put out the flames. As the story developed, investigators established that the man – who worked as an altar server – was the one who closed up the building for the night.

He was briefly detained by police last week but was then released as detectives failed to link him to the fire. However, late on Saturday, he was charged with arson before being put in pre-trial detention, French media reported, citing the 39-year-old’s lawyer.

“My client cooperated [with police],” said lawyer Quentin Chabert. The man in question told the magistrate court that he lit three fires in the cathedral, which inflicted heavy damage to the cathedral’s 17th-century organ.

He is “consumed with remorse and overwhelmed by the magnitude of the events,” but feels “liberated” after admitting the involvement, Chabert announced.

The suspected arsonist could now face a 10-year prison sentence and a €150,000 ($175,000) fine, Nantes prosecutor Pierre Sennes said in a statement, according to the BFMTV.