Scientists have made a jaw-dropping breakthrough in organ transplant research which could one day pioneer an entirely new approach, and save thousands of lives in the process, all by hooking organs up to live pigs. 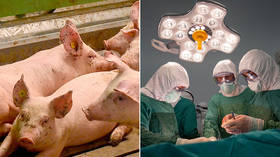 Organs donated for transplant must meet incredibly high standards to be considered viable, and there is often a long waiting list as a result, with many donated organs considered unsuitable and many patients unfortunately running out of time.

A multidisciplinary team from Columbia Engineering and Vanderbilt University has been developing a technique called cross-circulation for the past eight years.

This method, in which donor organs are hooked up to live animals, could greatly increase the number of viable lungs in the donor pool by revitalizing damaged human lungs that are considered unsuitable for transplant, even after existing recovery techniques like ex vivo lung perfusion (EVLP) have been attempted.

EVLP involves placing the lung in a sterile dome and pumping it with an artificial solution.

In their latest study, the team took six donor lungs and attached five of them to anaesthetized pigs that were immunosuppressed in order to prevent their bodies’ natural defenses from attacking the already weakened lungs. The sixth lung was attached to a pig that was not immunosuppressed, as a control.

At present, EVLP is used to support and slightly improve lungs awaiting transplantation outside of the donor’s body, but the clock is ticking – this technique can only be used for a maximum period of eight hours.

Using the cross-circulation technique, however, the researchers have kept donor lungs viable for up to four days, affording as much time as possible for surgeons to prep the recipient while also allowing the lungs to recover as much as possible.

However, medical professionals still need to develop a clear protocol for how the treatment might work in a clinical situation, including how to house and ethically manage medical-grade, pathogen-free animal hosts. And the cost would be enormous, given the rigorous standards required for animals to be considered for exogenic (cross-species) treatments.

More work is needed to develop the method, but it has shown remarkable early promise. The scientists now hope to extend their research to other organs and test the recovery of livers, hearts, kidneys, and limbs using the cross-circulation technique.