Paul Gallant has a new perspective on violent protests after mocking President Donald Trump in June for saying anarchists were burning and pillaging Seattle. All it took was for the mayhem to come near the talk show host’s home. 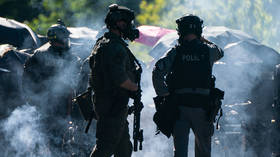 “I feel like I need to buy a firearm because this is clearly going to keep happening,” Gallant said Saturday night on Twitter after coming home to see the Starbucks coffeeshop below his apartment complex “destroyed” by vandals. “Enough is enough. It looks like a block party down the street from me. Really angry right now.”

I feel like I need to buy a firearm, because clearly this is going to keep happening. Enough is enough. It looks like a block party down the street from me. Really angry right now.

The reaction stood in stark contrast to last month, when Trump complained that Seattle’s mayor was allowing violent protesters to take over the city. “These liberal Dems don’t have a clue,” the president said. “The terrorists burn and pillage our cities, and they think it’s just wonderful, even the death.”

Gallant, who co-hosts the ‘Danny & Gallant’show on Seattle’s ESPN radio affiliate, tweeted in response: “Walked through it last night out of curiosity and saw no burning, pillaging or deaths. Chill dawg.”

Gallant said last night that police had advised residents to stay away from his apartment building because explosives could be inside the damaged Starbucks. He posted pictures of the damage, saying, “Great job a—holes,” and noted that he’d also seen a fire a few blocks away. “Zero clue what’s going on, but the cat and I are going to find out.”

Chill dawg, its just the summer of love according to your mayor

Gallant acknowledged the humor: “Woke up to a bunch of people tweeting ‘chill dawg’ at me. I laughed.” He said he stood by his earlier statement, as he had walked through the CHAZ autonomous zone created by anarchists and found it to be less bad than it was portrayed. “Then burning and pillaging actually happened,” he said. “Classic.”