“An anarchist is someone who doesn’t need a cop to make him behave,” American anarchist Ammon Hennacy once wrote. Based on the scenes playing out in Seattle’s Antifa-occupied ‘autonomous zone’, Hennacy was dead wrong. 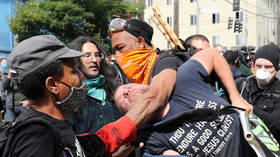 A ragtag collective of Antifa types, anarchists, socialists, and ‘Black Lives Matter’ activists have occupied a six-block area around an abandoned police precinct in downtown Seattle for a week now. Roads into the ‘Capitol Hill Autonomous Zone’ (CHAZ) have been blockaded, and the would-be revolutionaries inside have set in motion a bold experiment: to prove that a cop-free society, based on “mutual aid,” can sustain itself.

Sunday night seems to have proven otherwise. When the owner of an auto shop in the zone found a man attempting to light his business on fire, he detained the culprit, or so he told a crowd gathered outside. However, rather than let their comrade be handed over to law enforcement, the crowd set about pulling down the fence around the lot, in a bid to free the thwarted arsonist.

“The police won’t come,” the owner told a cameraman. “The fire department won’t even come. This is really bad for business. Covid was bad enough, and now this stuff basically put the icing on the cake.”

With the police absent, the zone’s de-facto warlord, rapper Raz Simone, arrived to defuse the situation. However, Raz is not bound to the same rules of conduct as the Seattle Police Department. In a series of videos published by conservative journalist Jack Posobiec, the rapper-turned-strongman can be seen chasing down an accused thief later on Sunday night and ordering his bag searched, as gun-toting guards keep the suspect on the scene.

The facade of order was broken when a man attacked the supposed thief, who slipped away in the confusion.

Someone ran in and began beating the accused thief. Then a commotion started and he slipped away pic.twitter.com/9CWpOxnfaG

Enforcing private property rights in an anarchist utopia has proven difficult. One of the CHAZ occupiers took to Reddit over the weekend to complain that their tent had been looted and their laptop stolen, along with $400 in cash. The CHAZ community quickly stepped in to reassure the victim that “a disadvantaged resident was in greater need of the items than you,” and to think of the theft as an “unplanned donation.”

Much of the zone’s strategizing and organizing happens on Reddit. Here, some of the CHAZ organizers pondered a conflict resolution process over the weekend, to prevent similar thefts and disagreements. One of the plans discussed was the creation of a “Conflict Resolution Advisory Council.” However, the initial plan of electing one black man, one black woman and one white woman to resolve disputes soon fell apart when the organizers decided to include trans and non-binary representatives of all races, homeless members, mixed-race children, as well as 12 Asian members, as the original plan of including one Asian was deemed racist.

This CHAZ (Seattle’s new autonomous zone) discussion of setting up a conflict resolution council is absolutely worth a read if you want a laugh. pic.twitter.com/qXFnDeZDkU

With the council debate mired in intersectional squabbling, Raz and his band have had free rein to impose their own vision on CHAZ. The ‘warlord’ rapper has been accused of punching journalists, while activists were seen on video placing a Christian preacher in a chokehold on Saturday.

“the autonomous zone has the right to reject you”A citizen of #CHAZ yells at a street preacher being held down by Antifa As he screams “I am free citizen!” While they pry his speaker from his hands And chokehold him at one point face down like George Floyd (video below) pic.twitter.com/a1pry438jA

A number of overdoses have also been reported, to which Seattle’s emergency services had to respond.

Man in #CHAZ overdosed & is rushed out by Seattle Fire After passing out on a field His eyes were rolled back and was unresponsive Antifa medics did not want people filming the incident More info on @JackPosobiec as his source was on the scene too pic.twitter.com/wq5TPBsL1E

A man overdosed on CHAZghanistan. The “autonomous zone” called US ambulance to treat him. pic.twitter.com/Yu2rQgegs6

City authorities, meanwhile, seem content to let the ‘Lord of the Flies’ situation play out in the CHAZ. Rebuffing calls from President Donald Trump to stop the “ugly anarchists” “Immediately,” Seattle Mayor Jenny Durkan has called the occupation a “summer of love,” and scolded Trump, telling him “don’t be so afraid of democracy.”

Some residents are unhappy with Durkan’s hands-off approach. “I’d like to see the police precinct restored. I’d like to see the city of Seattle step up and represent their people,” the auto store owner said on Sunday night. Another resident told the Daily Caller that he’s been “scared every day” since the zone was established, claiming he’s “heard screams of terror out there” on the streets.

I spoke to a resident of Capitol Hill, the area of Seattle that is now CHAZ.He was terrified & told me that the very lawmakers he supported and elected have abandoned him.“This is personal, because this is my home & I don’t have cops anymore.”VIDEO: https://t.co/WnaKWXmGTlpic.twitter.com/MJdAhSYRX0

However, a collection of self-described “American Patriots,” made up of various militia and biker groups, is planning on retaking the zone from the leftists. According to an event posted on Facebook, more than 1,500 members of these “patriot groups” will descend on downtown Seattle on July 4 to “tear down the illegal barriers on public property, clean up the mess these communist kids made, and return the police station over to Seattle Police Department control.”