China has shut down public transportation in Huanggang, a city close to the epicenter of the coronavirus outbreak that has killed 17 so far. This follows the quarantine of Wuhan, where the virus originated. 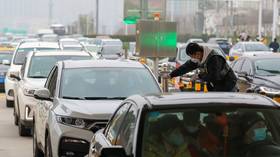 Chinese health officials announced that Huanggang city is suspending its public transit, including both rail and buses, following the outbreak of the new coronavirus, dubbed 2019-nCoV, which started in mid-December 2019.

Indoor entertainment venues, such as internet cafes and movie theaters have also been ordered to close. The local authorities are asking the seven million citizens to remain at home, and to not leave the city except for “special circumstances.”

Neighboring Wuhan, the epicenter of the outbreak, has already been cut off from the world. The situation is further complicated by the advent of the Lunar New Year, China’s largest holiday, as hundreds of millions of people are traveling home to spend time with their families.

The novel coronavirus was first discovered in December, with the initial cases appearing near Wuhan’s Hunan Seafood Market, a so-called ‘wet market’, where live animals are sold alongside raw meat, fish and seafood. Wuhan authorities shut down the market on January 1, and banned the sale of live animals at markets in the city on January 22.

The 2019-nCoV virus is a zoonotic disease, meaning it originally spread to humans from animals.

However, Chinese health officials still aren’t sure how the virus is continuing to spread, and whether human-to-human contagion is possible. So far, there have been over 500 confirmed cases of infection in China, with 17 dead.

China was previously rocked by a coronavirus back in 2003, when SARS killed more than 300 people over a period of eight months.