The US drone strike that killed a top Iranian general was ordered in retaliation for previous attacks, the White House said in a memo, contradicting earlier claims that an “imminent” threat justified the assassination. 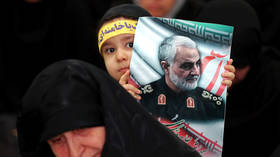 Now over a month removed from the targeted killing of Iranian Quds Force commander Qassem Soleimani, the White House on Friday has offered yet another rationale for the operation, the latest in a series of alternating arguments offered by the president and Pentagon officials.

“The president directed this action in response to an escalating series of attacks in preceding months by Iran and Iran-backed militias on United States forces and interests in the Middle East,” the memo said.

While the document notes that the assassination was meant to “protect” American troops and “deter Iran” from future attacks, US President Donald Trump previously maintained Soleimani was killed specifically “because they were looking to blow up our embassy” – later expanding the alleged Iranian plot to four American embassies.

Defense Secretary Mark Esper initially questioned that assertion, telling CBS “I didn’t see [a threat]to four embassies,” but eventually came around to “the president’s view,” all the while providing no evidence for any of the conflicting accounts.

After a Senate briefing on the drone strike in January – where officials from the State Department, the CIA and the Pentagon made a case for the operation – Republican Senator Mike Lee of Utah said it was the “worst” military briefing he had ever witnessed, arguing lawmakers were left “under-informed as to the legal and factual basis for the attack on Soleimani.”

Extremely popular among Iranians due to his role in beating back Islamic State (IS, formerly ISIS) in both Iraq and Syria while leading the Quds Force, Soleimani’s death was publicly mourned by thousands across the country. The US strike also sent tensions soaring between Washington and Tehran – culminating in an Iranian missile strike on two American bases in Iraq – and drove a wedge between the US and the Baghdad government.

Killed while visiting Iraq for a meeting with then-Prime Minister Adil Abdul-Mahdi, Soleimani’s execution was not cleared with Iraqi officials, prompting a parliament vote to expel US forces from the country, though Baghdad has yet to follow through on the move.

With the narrative around the killing continuing to shift and evolve, it remains unclear which version of events the White House will ultimately land on, or whether lawmakers or citizens alike will ever get a straight explanation for why the operation was necessary.