A hideous assault on a teenage girl in Melbourne sparked outrage, as footage of the stomach-churning attack spread across social media. The victim is reportedly too afraid to press charges against her assailants. 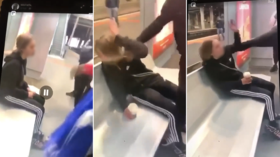 The 15-year-old was waiting for a train at Melbourne’s Southern Cross Station when she was ambushed by a group of around eight young people. Video of the attack shows the young white girl sitting on a bench as a group of black teens repeatedly punch and kick her head. The victim tries to block the blows with her hand, but never retaliates.

A teen in Australia was brutally attacked by a gang of eight girlsThe gang posted their videos of the beating on Snapchat to show off to their peers. The victim believes she was targeted because she spoke to a boy who one of the group ‘liked’ MORE: https://t.co/Pkc2x3Jsugpic.twitter.com/FQXQGl3WhS

A local news channel, citing the victim’s mother, said the teen was also dragged to the ground and stomped on. She reportedly suffered broken ribs, black eyes, a swollen temple and bruises all over her body.

Her mother told the media that no one came to her daughter’s aid, even as she bled from her nose and mouth as she lay on the platform. The teen reportedly knew one of her attackers, and speculated that she’d been targeted because she’d spoken with a boy who was a love interest of one of the assailants.

Police were informed of the assault by the girl’s mother, but they have so far declined to investigate, reportedly claiming they need a statement from the victim. However, according to local news sources, the teenager is afraid there will be retribution if she presses charges against the group. The incident has caused an uproar online, with many speculating that the media has remained largely silent because the girl’s attackers were black.

16 year old girl brutally bashed by gang of 8 in #Melbourne train station. Where is your report @newscomauHQ? WHERE IS IT? What’s the matter? Her skin the wrong color?You have no integrity and provoke naught but intense disgust. #auspol#JusticeForMikhttps://t.co/wY07TfKuTe

Imagine how the media would react if this was a bunch of white kids beating up some defenseless young black woman. I’d find it disturbing either way.

A GoFundMe page has been created for the victim, and, at the time of publication, had already raised some AUS$33,000 (US$23,000). The money will be used to “enable her to gain support through therapy, to gain the physical martial arts training to give her back her confidence to leave her house again with a little less fear, and, if possible, something for her to enjoy – a little weekender or holiday to show her how much love there is out there for her so she doesn’t feel alone,” the fundraiser’s creator wrote.