Video of a Boston Dynamics Spot robot dog apparently wandering a city street on its own has struck terror into the hearts of social media users — though some defended the ‘bot, pointing out humans can hurt each other without help. 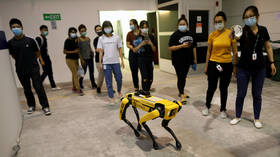 A Canadian Twitter user posted video of the four-legged yellow robot ambling down the sidewalk on Thursday, though it’s not clear where it was actually filmed. The person taking the footage, though initially startled, opts for a friendly approach, addressing the quadruped with “Hello friend!”

guys look who i saw out on da street!!!:) pic.twitter.com/rPczxbWAkL

The dog-bot turns toward the cameraperson and appears to snap a photo before walking away.

Boston Dynamics’ robot dogs have been deployed in Singapore to enforce social distancing during the Covid-19 pandemic, and some US police departments have acquired their own, causing consternation among civil liberties groups. However, the four-legged model has been available to the public since June for anyone with $74,500 to buy one, meaning this particular Spot might have belonged to a private citizen.

The clip polarized social media users, many of whom were filled with horror at the sight of the seemingly autonomous metal canine. “Shoot on sight,” one said succinctly.

seeing a video of a Boston Dynamics robot actually out in public has filled me with dread. we can’t let this continue. https://t.co/huTWZvxuVa

Hit these with your car. Destroy them. https://t.co/e9CnQSWGjH

Many commented on Spot’s disarmingly cute appearance. “I hate this but I also kinda wanna sit on top of its back & go for a ride,” one user tweeted.

More than a few were reminded of the Black Mirror episode “Metalhead” — literally inspired by Boston Dynamics’ products — in which armed and extremely persistent robot dogs hunt and kill humans in a post-apocalyptic landscape.

Spot’s defenders noted humans were already capable of doing plenty of damage without bringing robots into it, and insisted the technology should be embraced.

like i am not worried about quadrupedal robots when bipedal humans are more than willing to kill me right now, today

Itll never not amaze me how every time one of these Boston Dynamics videos get posted people lose their shit. And its never anything scientific. Its you didn’t see Black Mirror, you didn’t see Terminator, you didn’t see Matrix. Yes lets not further technology because of a movie https://t.co/FGLKRw91xY

However, others more familiar with Spot’s military origins (and concepts like drone warfare) predicted the dogs would be armed and dangerous in no time.

How many years away do you think we are from being hunted down by Boston Dynamics robot dogs for protesting the government https://t.co/nsrVD7Byy6

They ain’t gonna be so happy to see these when they are talking around with machine guns on their backs though…As long as capitalism exists these things will be used to keep us in line. Guaranteed. pic.twitter.com/009iIlBNfO

Beneath its weirdly cute exterior, Spot contains advanced military technology. Its predecessor, the Big Dog, was unveiled in 2005 as a sort of pack mule capable of carrying equipment over unstable terrain and developed in partnership with NASA, funded by the Defense Advanced Research Projects Agency (DARPA). However, the Big Dog was deemed too loud for combat and — supposedly — shelved.

Share. Twitter Facebook Google+ Pinterest LinkedIn Tumblr Email
Previous ArticleQuiz: How well do you remember The Den?
Next Article Holidaymaker sues travel firm for £100,000 ‘after it failed to warn her of the dangers of wearing flip-flops’