We are hosting a panel of young voices to discuss the reality of life in Northern Ireland and how positive change could be brought about.

ACROSS IRELAND, MAJOR debates are taking place about the future of a shared island and the possibility of a united Ireland.

But what about the reality for people living in Northern Ireland right now?

Too often the concerns of young people are overlooked in a conversation dominated by the major parties of unionism and republicanism.

As part of The Good Information Project, we’re going to host a discussion this Thursday on mental health, education, housing discrimination and cultural issues like languages and discrimination. We will be joined by a panel of young voices from a variety of backgrounds, to find out what solutions they see for the North.

Sign up below to take part in this conversation about what the future looks like for Northern Ireland.

Jay Buntin is director & co-founder of Pure Mental, an organisation focused on education and awareness of youth mental health problems and suicide in Northern Ireland.

Naoise Ó Cuilín is an Irish language activist from North Belfast, currently studying for an MA in international security and conflict studies in DCU. He has been involved in political and social justice campaigning throughout his life.

Alana Cahoon is from Portadown, cofounder and communications officer of the Secondary Students Union of Northern Ireland, and an ambassador for T:BUC (Together: Building a United Community). She is bringing a unionist perspective to the discussion.

Hafsa Abdullahi Mohamed moved to Northern Ireland from Somalia and now lives in West Belfast. She will be speaking to her experience of the region as a young Muslim.

Dermot Hamill is from South Armagh and runs the Youth Voice NI blog and podcast, hoping to get young people interested in politics.

Sign up now to join the live panel discussion 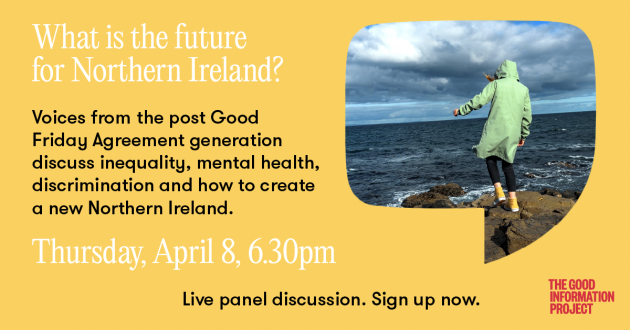