The Sinclair Broadcast Group will not air a controversial interview with a Covid-19 conspiracy researcher, opting to toss the segment altogether after saying it would postpone the program to “provide additional context.” 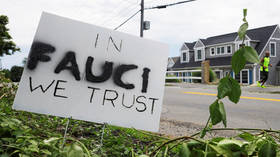 The conservative media giant said on Monday that it would throw out its interview with Judy Mikovits – a former research scientist who gained prominence after starring in the documentary film ‘Plandemic,’ where she pushed a number of conspiracy theories about the coronavirus, vaccines and National Institute of Allergy and Infectious Diseases head Dr. Anthony Fauci.

We also reiterate our appreciation for all that Dr. Fauci and his team have accomplished for the health and wellbeing of Americans and people worldwide.

We also reiterate our appreciation for all that Dr. Fauci and his team have accomplished for the health and wellbeing of Americans and people worldwide.

Sinclair’s initial plan to run the interview – which was set to air on TV stations around the country last weekend – prompted a major media outcry, with CNN and other mainstream outlets leading the charge to denounce the conspiracy-laden segment.

Though Sinclair briefly stood by its plan to air the original interview, arguing that it did not endorse Mikovits’ theories, it abruptly reversed course on Saturday amid growing criticism online, saying that it would delay and rework the episode to offer “other viewpoints.” That apparently did not stem the controversy, however, and the network has now chosen to cancel the hot-button segment for good.

In the now-scrapped interview, Mikovits reportedly told host Eric Bolling that Fauci had helped to manufacture and transport coronavirus samples to a research lab in Wuhan, where the Covid-19 pandemic is thought to have originated – one among several questionable claims to also feature in the ‘Plandemic’ film, which has been widely censored online.

Though it’s unclear what prompted Monday’s decision, CNN reported that local TV stations around the US – of which Sinclair owns nearly 300 – had received complaints from viewers, who requested they not air the segment.