Sinclair Broadcast Group, the US’ largest local news conglomerate, has canceled an interview with a coronavirus conspiracy theorist, after CNN whipped up an online outrage campaign against the conservative broadcaster. 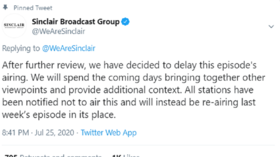 In a segment due to air this weekend, ‘America This Week’ host Eric Bolling sat down with Dr Judy Mikovits, a disgraced scientist who believes that the coronavirus pandemic was orchestrated by National Institute of Allergy and Infectious Diseases head Dr Anthony Fauci and Bill Gates to push vaccines on the population – a theory she set out in the documentary film ‘Plandemic,’ which has been effectively censored off the internet.

Bolling called Mikovits’ claims “hefty,” and brought on medical contributor Dr Nicole Saphier to refute them, but CNN claimed the host didn’t push back hard enough against Mikovits’ “baseless conspiracy theory,” and hammered Bolling for allowing Mikovits to “continue to make her case.”

As CNN’s article circulated on Twitter on Saturday morning, the network’s liberal audience called for a boycott of Sinclair. The broadcaster initially stood by its decision to run the segment, declaring that “at no juncture are we aligning with or endorsing the viewpoints of Dr Mikovits.”

However, within an hour, Sinclair bent the knee and pulled the episode from the air until additional content could be added to counter Mikovits. “All stations have been notified not to air this and will instead be re-airing last week’s episode in its place,” Sinclair tweeted. For good measure, the company added “we valiantly support Dr Fauci and the work he and his team are doing to further prevent the spread of Covid-19.”

After further review, we have decided to delay this episode’s airing. We will spend the coming days bringing together other viewpoints and provide additional context. All stations have been notified not to air this and will instead be re-airing last week’s episode in its place.

Sinclair is an incredibly powerful organization to have been swayed by an online outrage campaign. The company and its partner organizations own nearly 300 local TV stations around the country, and reach 40 percent of American households.

Proponents of the boycott celebrated their victory on Twitter, declaring that “we shamed them into doing the right thing.”

We shamed them into doing the right thing. https://t.co/Hm2WrNxStb

Can we shame them out of business next.

Amid a recent upsurge in ‘cancel culture,’ few campaigns have brought a company to its knees as fast as Saturday’s blitz by CNN. Similar campaigns have been mounted against Fox News’ Tucker Carlson – with an advertiser boycott and attempts by journalists to doxx his family among the most recent moves, but Carlson remains on the air and unapologetic.

For Bolling and his colleagues at Sinclair on the other hand, it’s back to the studio to reshoot their offending segment at CNN’s behest.