He pinpoints his first Easter Monday outing at Fairyhouse, soaking up the atmosphere of an Irish Grand National.

Standing as an 11-year-old at the last fence with his brothers Ross and Norman, watching Omerta take flight with Adrian Maguire on board en route to victory.

Home growing up was in Drumree, a ten minute spin from the track. Home now is even closer, he’s cut the commute in half.

“I think 1991 was the first year I was brought. I could run free then, I needed minding before that. I’ve been at it ever since.”

It is a race that continues to capture his imagination. The first one in attendanceout of the saddle was always going to be different. The current climate heightens that sense all the more.

He formally pulled the plug on life as a jockey on a Saturday night last July. and scarcely could have imagined a stranger sporting world to be inhabiting in retirement.

There will be no noise or hysteria this afternoon at the Meath course but after it fell victim to the mass cancellations of spring 2020 as the pandemic took hold, there is at least gratitude at it being staged.

Geraghty has slipped into a punditry role with RTÉ, he’ll be on duty on TV today. Even if there are no crowds, this week with the Aintree blockbuster to come next Saturday is one to savour for an afficiando of the sport.

And he is adjusting to a shift in gear in his life.

“I’m enjoying it more than I thought.

“I thought to some degree I’d be a little bit tortured but when you step away from it, it’s just the steadier pace of life and you’re off that adrenalin rush where it’s constant go.

“When the clock is your own, you realise that, ‘Yeah I was ready for that.’

“I wasn’t looking at Cheltenham through gritted teeth or peeping through fingers or anything like that.

“I knew that it was nice to just be working at a steadier pace, not rushing around the place.” 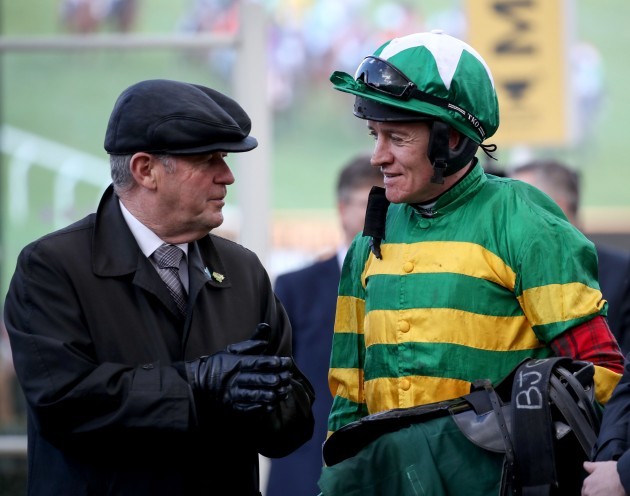 JP McManus and Barry Geraghty at the 2020 Cheltenham Festival.

Fairyhouse on Easter Monday became a target to aspire to from a young age. The geographical location elevated it in his mind.

“Over the years as a kid watching the television, like Desert Orchid winning in 1990, it was always just such a big race. In the country it’s a big race but in the county and locally, it is massive.

“To make a comparison for myself, you’d put it up there with a Gold Cup or a Champion Hurdle. The Scottish Grand National or the Welsh, and I didn’t win either of them, they wouldn’t have had that. It just means so much locally. I would have grown up dreaming of it.”

His first taste of it arrived in 1998 on Miss Orchestra. The 18-year-old jockey was on board the second favourite, fresh from winning the Midlands Grand National, but crossed the line in 8th.

It was the start of a long, arduous wait for glory but for his family there were celebrations a short time later when Ross was on board The Bunny Boiler for success in 2002.

“I was delighted for him. I wouldn’t have had any envy towards him. I’m not just saying it for the sake of it but I was never that kind of way. I was just mad to get it myself. But it’s like you have to get it on your own two feet. There’s no point wanting what someone else has.

“You’ve to make it yourself. It was a great win for Ross and it was great for one of us to have it at that stage.”

16 years after his first experience, Geraghty reigned at last in the marquee local event through Shutthefrontdoor.

“I was thinking I might never get to win it and he was the only one I was remotely close on.

“It definitely meant a lot to win it and more because of the local connection and the wait made it even all the more special.

“I haven’t looked at it in a long time. But I remember the whole way through the race, that it was very much plain sailing, which it tends to be when things are happening for you.

“To win a race like that, you generally need a good clear run, trouble free. I knew jumping the 5th last I had a massive chance and I was just sitting and waiting and biding my time really. He battled really well from the last to win.

You’re booked. You could do a no show if you wanted but that’s not the way. It’s just how it is.”

The flipside was his record in the world’s greatest steeplechase. Patience was not required to the same extent as he realised a major ambition in 2003 on Monty’s Pass, a race he could not have scripted better.

“It was a great box to have ticked from an early age. You see so many top-class riders who never have the chance. It’s a great one to have off your list.

“The first year I was in Aintree I rode in the National, I hadn’t been there before that. Growing up as a kid watching that, you dream of riding in it, let alone winning it.

“He completely bolted up. Again to win it, you usually get a very clear run round and I did on him. You couldn’t ask for better because you don’t always jump as well and he did. You don’t get that too often. There was no hairy moments at all. I’d the luxury to take it all in. 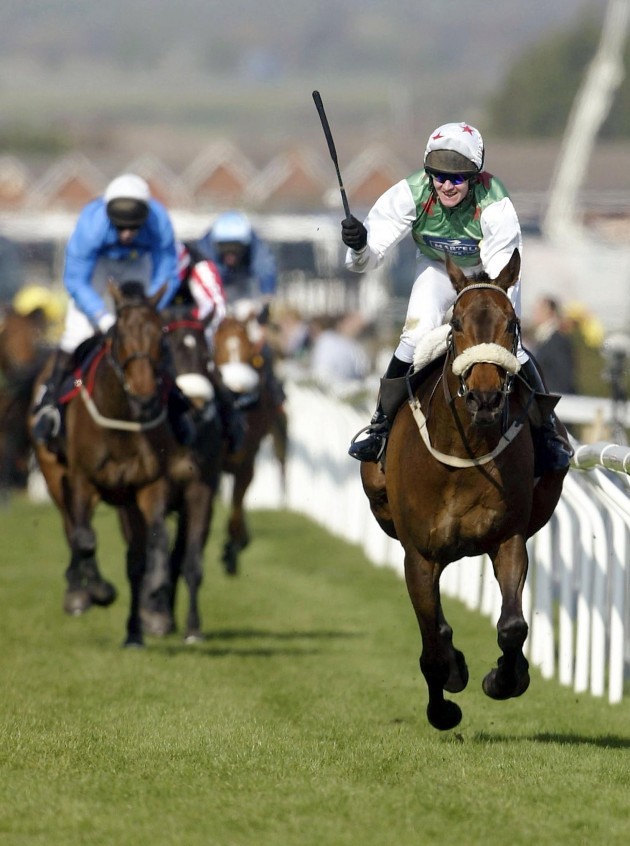 Barry Geraghty and Montys Pass in 2003.

“I remember the third last fence, it’s an eerie silence, you’re far enough from the racecourse that you don’t hear the crowd. You’re just sitting in silence, coasting along thinking you’re on the verge of winning the biggest race in the world. You could hear a pin drop. It’s a moment I’ve always kind of reflected on.”

Much like his efforts in the Grand National closer to home, that proved the solitary occasion that Geraghty entered the winners’ enclosure after that race. He can think of other decent showings like third on Slim Pickings in 2007 and fourth on Big Fella Thanks in 2010.

But it is April 2003 that his mind is drawn back to, the Sunday night when the success for Monty’s Pass was feted in the East Cork village of Conna where trainer Jimmy Mangan was born and bred.

“There isn’t a free free in the Winners’ Enclosure on one side of the road or in the Fisherman’s Rest on the other,” recalled Geraghty in his autobiography ‘True Colours’.

“But that doesn’t matter because the party is spilling out into the middle between them. It’s parents and children, old people and young, and no matter what age, everyone knows that this day, in this place, might never come again.” 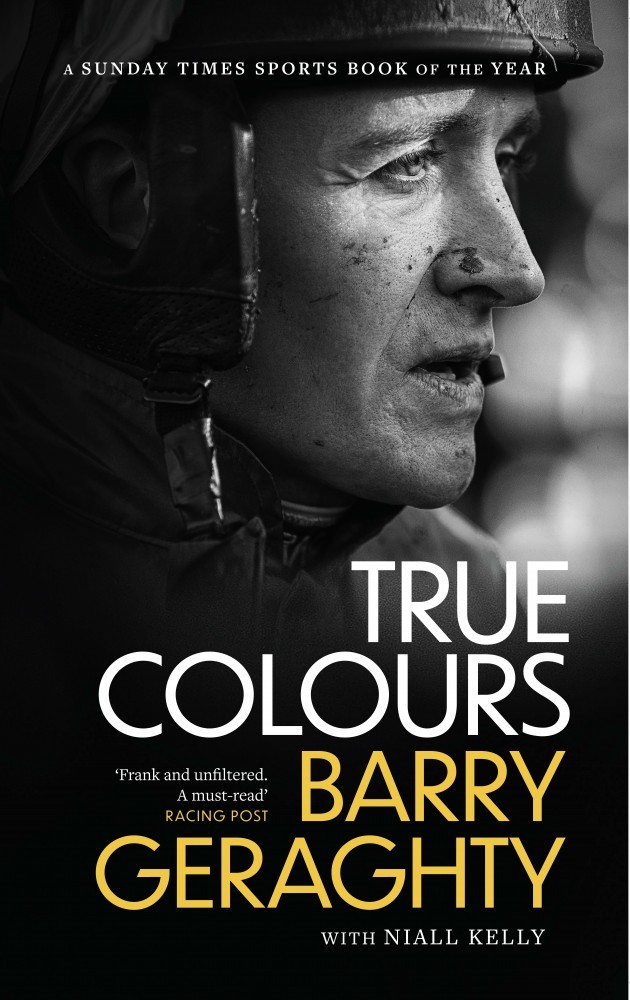 “It would have been the same in Rataoth when Bobbyjo won it,” he recalls now.

“We’ve been blessed in Ireland to have success in recent years from Mouse Morris, Fethard, Rule The World, every year we get an Irish winner, parade it through the town, on a local level you’d never tire of that because to get that is brilliant.

“I went down to Conna few years ago to see Monty, driving through the village, see the sign and taking it in. Reflect on the night and the fun and everything, it was massive.”

Again it will be an Aintree Grand National in a much-changed environment, stripped of the crowds that pack into the Liverpool venue. For Geraghty it justified the hype, participation affirmed why it was a race of such magnitude.

“Because of the parade and the fanfare it’s different, there’s no other race you have 40 horses at the start. Everyone’s flying around, trying to get a position. Everyone’s wishing each other good luck.

“It’s as much settling your own nerves as anything, in the early years especially. As you get older and get used to it, you’ve a more laidback approach, you know what’s coming. But there’s a rush of excitement no matter what age when you’re at the start.

“It’ll be strange this year but it’s still the biggest race in the world, it’s history making and it’s brilliant.”

Murray Kinsella, Bernard Jackman and Gavan Casey look back on the Pro14 final and ahead to the provinces’ European knockout games.