The Luton branch of Pure Gym has been forced to pull down a promotional post touting its ‘12YearsofSlave’ workout after its seeming minimization of slavery’s harms caused jaws to drop across the internet. 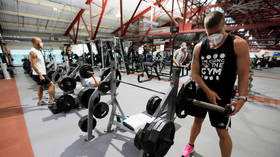 Pure Gym Luton & Dunstable posted, then deleted, a message hyping its ‘12YearsofSlave’ workout – a copyright-friendly variation on the title of award-winning film ‘12 Years a Slave’, which depicted the horrors of slavery in gruesome detail – on Facebook after followers were shocked and disturbed by its cavalier comparison of an intense fitness routine to human bondage.

“Slavery was hard and so is this,” the gym’s account matter-of-factly posted on Monday, referring to the workout that included a 100 meter sprint, pushups, box jumps, burpees, squats, and other fitness maneuvers (numbering 12 in all). The post was removed after several hours of very public online abuse were sent its way.

Parent company Pure Gym scrambled to distance itself from its wayward franchisee. “This post is wholly unacceptable, was not approved or endorsed by the company and was removed as soon as it was brought to our attention,” the company pleaded on its Instagram account after deleting the earlier post, insisting the corporation “apologizes unreservedly” nevertheless.

Statement from PureGym PureGym apologises unreservedly for a post regarding Black History Month that was made today by our gym in Luton & Dunstable. This post was wholly unacceptable, was not approved or endorsed by the company and was removed when it was brought to our attention. We take this matter extremely seriously and are urgently investigating how and why this post was made. Thank you to those people who commented on this post and for raising this with us.

“We take this matter extremely seriously and are urgently investigating how and why this post was made,” the post continued, adding that Pure Gym’s 271 local subsidiaries run their own social media channels.

Personal trainer Matt Simpson, who designed the grueling workout, explained on Instagram that he was asked to remove the post after the outrage began trickling in. “Apparently the wording was an issue but wasn’t asked to edit it,” he said in the post, which is no longer publicly available. Simpson took to Twitter to question what was so “interesting” about the name of the workout, arguing he had chosen the film because the routine had 12 exercises in it. He was brutally ratioed in the now-deleted tweet. 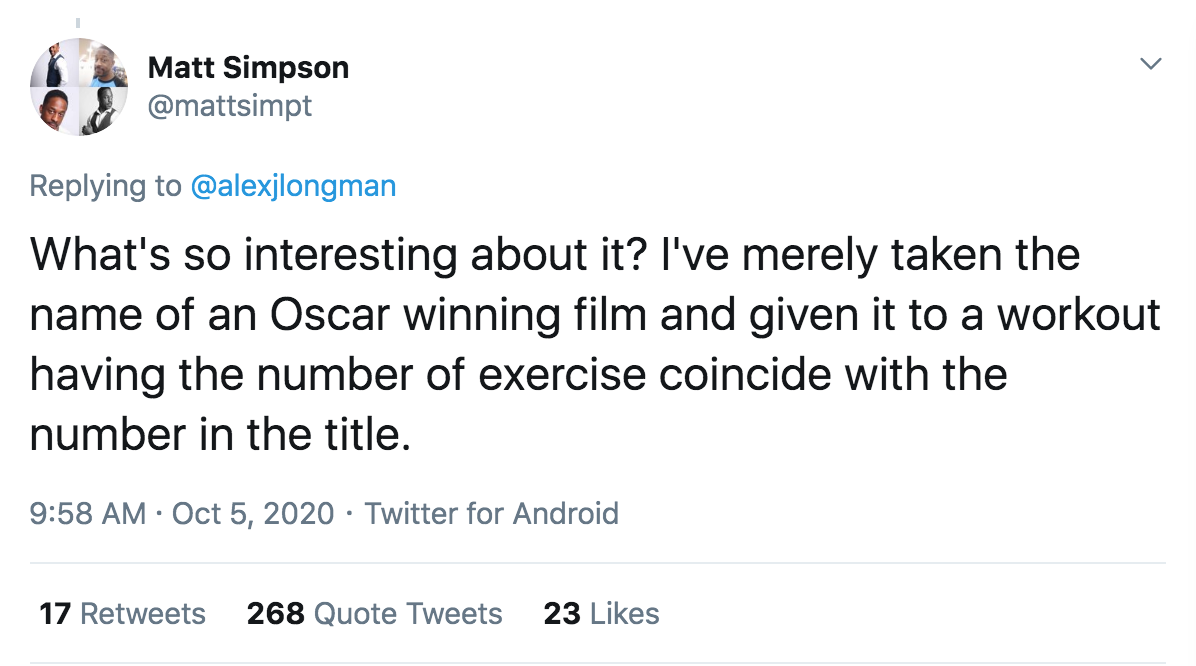 Simpson, who is black, is assistant general manager of Pure Gym Luton, according to his Instagram profile. However, many suspected he wouldn’t have his job for long – or that Pure Gym would be bullied into closing its doors. “Dismissal is tough – so is this workout,” one user quipped.

I’m sorry but dismissal is exactly what is needed. Someone with zero marketing experience knows that comparing slavery to a gym workout is wrong. “Slavery was hard and so is this”. Who even thinks that is ok to compare the two…Lack of leadership and marketing approval.

And in other news ..Pure Gym announced closure of all its gyms due to their management being 🤡 s

Indeed, the apology only seemed to dig the hole deeper, alerting more people to the Luton gym’s cringeworthy comment – as did Simpson’s attempts to explain his choice.

I am absolutely disgusted by what I’ve seen. How dare you, and your employees, make an absolute mockery out of the pain felt by Black people. Black History Month is not a joke. Black people are not a joke. Stop making a joke out of our lives. Despicable.

This isn’t good enough at all. Do you people think that millions of people dying and sold as slaves is a bit of banter? And to do this during Black History Month? Was the agenda to antagonise us?

“I can’t wait for their Holocaust inspired HIIT(let) workout,” one of several Holocaust-themed responses snarked.

Be sure to apply full concentration

Others suggested the woke community was going too easy on companies like Pure Gym, who were getting away with “lazy” verbal apologies for stepping on sensitive toes. At the very least, Simpson should lose his job, and all future social media posts should be monitored by the parent company, one user suggested, while another opined that “anti-racist training is needed urgently across the corporation.”

We need to stop accepting apologies like this one; they’re lazy & come too easily, whereafter too many nod & give them a rapid thumbs up. Nah, @PureGym. 🖕#ApologyNotAcceptedhttps://t.co/WI2ztUB6D5

This is pure vile and the scumbag who did it needs to be sacked immediately + ensure in future all posts are monitored by hopefully sound senior staff before uploaded.

However, a few held back from tearing Simpson’s head off, instead attempting to explain what was wrong with likening his workout to slavery – though they didn’t get far.

Oh Matt I am sure if the people who went through slavery were given a choice of your “12 years of Slave” workout at puregym and actual slavery, they would have chosen your workout. “Slavery was hard and so is this” ? You are comparing slavery to a flipping workout? 😱 pic.twitter.com/SZEgPnmWWA

Eek, I’m not a fan of ‘educate yourself’, but I’m astounded that you didn’t see the problem before and still can’t now. I genuinely hope that you will come to see it through the more constructive replies you might get