Spain’s Covid-19 death toll could be off by 60 percent, according to calculations by the country’s leading newspaper, El Pais, which suggest Spain has the second-highest number of deaths in Europe after the UK. 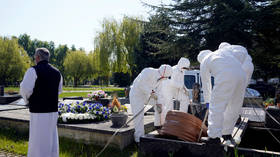 An El Pais investigation published on Sunday found that the official figure of 28,432 deaths is likely far less than the true number of people who have died with the virus.

Spain’s official death toll only includes people who had a confirmed Covid-19 diagnosis, and not those who were suspected of having it but were never tested.

El Pais looked at regional statistics on all suspected and confirmed deaths from the virus and concluded that 44,868 people died with Covid-19. This figure is close to the number of excess deaths recorded by the National Epidemiology Centre and National Statistics Centre (INE) in June. It found that there were 43,945 more deaths between January and May 2020 than the previous year.

The Spanish Association of Professionals and Funeral Services and the Carlos III Health Institute also calculated similar excess mortality figures during this time.

If El Pais’ figures are accurate, it would mean that Spain has seen the second most deadly outbreak in Europe after the UK, which has recorded over 45,000 deaths.

There was a lack of widespread testing carried at the beginning of the outbreak, which might explain the discrepancy with the official figures. At the end of May, the country lowered its death toll by 2,000 as a result of duplicate records and some regions reporting suspected cases as confirmed cases.

Spain’s Health Ministry has not commented on the report. The country has seen a surge in cases over the past few weeks, raising fears of a second wave.

Countries tally Covid-19 cases differently, with some only reporting confirmed deaths, or hospital deaths, while others report all actual and suspected cases and include those who die outside of hospital settings.