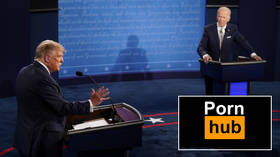 The US’s most popular adult website revealed that visits were down 18.5 percent as Biden and Trump traded barbs on stage in Cleveland, Ohio, on Tuesday. “That represents a significant change in visits during one of Pornhub’s peak daily traffic periods,” the website said.

It’s unclear if the exchange of ideas – and insults – between Trump and Biden was enough to keep viewers hooked the whole way through, as Pornhub’s stats covered only the first hour of the debate. Porn-viewing did jump again after the debate, however, with traffic to the site climbing 5.2 percent above normal levels.