A dozen additional cases of a nastier, even more infectious local strain of Covid-19 were confirmed by Vietnamese officials on Monday. The find has forced tens of thousands to evacuate from the tourist hotspot of Danang. 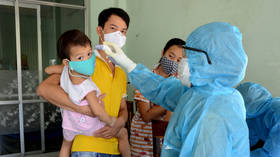 All of the new cases have been linked to a hospital in Danang, with four of the infected being health workers and others the patients who contracted the coronavirus inside the facility, Vietnam’s Health Ministry said. This puts the overall number of cases at 15.

The spike in Covid-19 at the hospital is caused by a new strain of the virus, which had been previously unknown to the country’s medics, the officials said. It’s believed to be more aggressive due to its multiplying with greater speed and causing a faster transition to serious conditions in patients.

The authorities have blocked several districts of Danang, banned public gatherings and introduced a mask-wearing regime to contain the disease. Some 80,000 people, mainly tourists, will also be evacuated from the city in the coming days.

Before the current outbreak, Vietnam hadn’t registered a single Covid-19 case in over three months. Since the start of a pandemic in December, 431 people got infected in the country, with all of them successfully recovering, according to official data.