Actor Dean Cain, who portrayed Superman in a 1990s TV show, has set Twitter ablaze after arguing that modern ‘cancel culture’ would have outlawed the superhero’s catchphrase, “Truth, justice and the American way.” 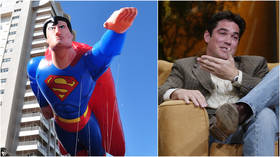 Speaking with Fox’s Ainsley Earhard on Thursday, the conservative actor took aim at ‘cancel culture,’ dubbing it “like an early version of George Orwell’s 1984” which would have barred the 90s-era character from uttering his iconic slogan.

“I promise you that Superman – I wouldn’t today be allowed to say: ‘Truth, justice, and the American way,’” Cain said, responding to a recent op-ed in Time Magazine calling for a “re-examining” of how superheroes are portrayed on screen.

Cain’s take – which also involved heavy praise for police, who he called “heroes” in their own right – was quickly savaged online, making the actor’s name trend across Twitter. While some critics took shots at Cain’s praise for law enforcement, others challenged his claim about ‘cancel culture’ altogether, arguing that Captain America is still widely popular and has yet to be thrown down the memory hole.

Dean cain is ignorant enough and so tone deaf that he thinks the amount of corrupt and bad cops out there is only 0.1%.You smell @RealDeanCainhttps://t.co/avKwcKyNSZ

Its astounding how used to certain peoples ignorance I am. Literally no one is word policing ‘the american way’ ffs. But, it doesnt even make me raise an eyebrow .. because dean cain. #ExpectedIgnorance

Dean Cain is bitching about Superman not being able to say the American Way anymore. What does the AMERICAN WAY mean? Ignoring science, treating BIPOC and the LGBTQ+ community like trash, a bad healthcare system and endless wars? Why would Superman believe in the American Way?

Award-winning comic book writer Tom King also waded into the fray, countering that he had used the “American way” catchphrase in a comic earlier this year and was not canceled for it, prompting a minor walk-back from Cain.

Well kudos to you! I stand corrected. I’m glad you did! What comic is that? (Also, the MF part of your tweet not necessary at all, but if it makes you feel tough, that’s ok) https://t.co/HzywfAJVfL

Though the Trump-supporting actor made no mention of immigration during the Fox segment, netizens nonetheless took offense on the behalf of illegal aliens – seeing that Clark Kent is himself a literal alien from outer space – apparently suggesting that only natural-born Americans can praise the “American way.”

Technically he was adopted. I’m sure the Kent’s got him his papers set up via the D.C. comics adoption agency for orphaned drop offs. lol

Superman is an immigrant adopted by a working class family whose archnemesis is a greedy tech billionaire, written by two Jewish Americans in direct response to the global rise of fascism.So no, Dean Cain should probably not play Superman today. https://t.co/3wug0955cC