Two New Jersey gym owners got an early-morning surprise when police arrested them at their business for continuing to keep it open in defiance of a coronavirus shutdown ordered by Governor Phil Murphy. 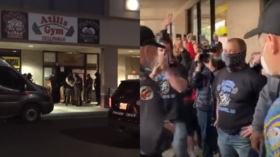 The Atilis Gym in Bellmawr, New Jersey, has been a flashpoint of controversy in the tug-of-war between civil liberties and public safety since owners Ian Smith and Frank Trumbetti reopened their business in May, saying that being forced to shut down for months had violated their constitutional rights. They each face charges of fourth-degree contempt of court, obstruction and violation of a disaster control law.

The two men have since been released. Both refused to leave the gym voluntarily when asked by police this morning and therefore were charged, the Camden County Prosecutor’s Office said.

Atilis posted a video of the arrests and issued a defiant statement on Facebook: “Welcome to America 2020, where feeding your family and standing up for your constitutional rights is illegal – Governor Murphy flexing his little tyrant muscles finally.”

The statement added, “Let’s make these idiots answer for their power trip.”

Monday’s arrests marked the latest escalation in the battle. Along the way, the gym owners and some of its members were issued citations for violating the state’s shelter-in-place mandate. After the Health Department issued a shutdown order, Atilis moved equipment to the parking lot and hosted outdoor workouts. The business was moved back indoors on July 4, but a judge on Friday ruled that Smith and Trumbetti were in contempt of court, and gave the state permission to lock or barricade the gym.

The owners vowed to remove the gym’s doors and stay inside to prevent it from being closed. Author BJ Dowlen said she was in the gym overnight, working on a book with its owners, and witnessed a “swarm” of police and sheriff’s officers “come bursting through the door” early Monday to arrest Smith and Trumbetti.

Smith brought more attention to the dispute by making multiple appearances on the highest-rated US cable news program, the ‘Tucker Carlson Show.’ Host Carlson mocked Murphy for allowing such enterprises as abortion clinics and liquor stores to remain open while forcing other businesses to remain closed.

“We’ve become a thorn in the side for Governor Murphy,” Smith told Carlson in an interview last week. “My partner and I are not willing to back down. We’re not going to have our lives destroyed over a political agenda that has nothing to do with us.”