If Congress is purging all things related to slavery and the Confederacy in the name of battling bigotry, the Democratic Party should be among them, says a resolution proposed in all seriousness by Rep. Louie Gohmert (R-Texas). 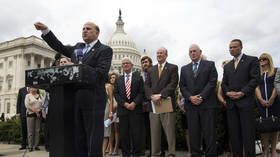 Gohmert’s resolution, proposed on Thursday, would mandate that “any political organization or party that has ever held a public position that supported slavery or the Confederacy shall either change its name or be barred from participation in the House of Representatives.”

That party, he noted, was the Democrats – and he provided long list of references showing that the party’s platform supported slavery starting in 1840 and opposed civil rights for African-Americans in the 1960s.

The Democrats made these rules, now they should live by them! pic.twitter.com/7P6uAQabEp

“Since people are demanding we rid ourselves of the entities, symbols, and reminders of the repugnant aspects of our past, then the time has come for Democrats to acknowledge their party’s loathsome and bigoted past, and consider changing their party name to something that isn’t so blatantly and offensively tied to slavery, Jim Crow, discrimination, and the Ku Klux Klan,” Gohmert said in a statement.

The immediate trigger for the resolution – cosponsored by fellow Republicans Andy Biggs (Arizona), Jody Hice (Georgia), Randy Weber (Texas) and Andy Harris (Maryland) – was Wednesday’s vote to remove the busts or statues of four former members of Congress who had either fought in the Confederate army or served in the government that attempted to secede from the US between 1861 and 1865.

Gohmert argued that extending the ban to the name of the Democratic Party is necessary “to avoid degradation of historical fact and blatant hypocrisy for generations to come.”

The Democrat Party platform of 1864 opposed abolition and supported and immediate peace deal with the ConfederacyHow can any serious liberal adopt the moniker of Democrat in 2020, given its racist past? pic.twitter.com/eZlInIGDaM

The Democrats have fashioned themselves as the party of woke anti-racism in recent months, with the party leadership kneeling on the floor of the Capitol while wearing scarves in the colors of Ghana’s traditional kente cloth and demanding the removal of Confederate names from US military bases across the South.