UK Prime Minister Boris Johnson seems to be misinformed about coronavirus guidelines limiting the size of groups, suggesting that confusion over the measures appears to extend to the very top of the government. 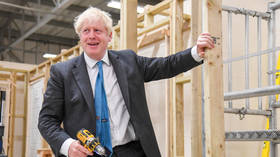 The British leader floundered after a journalist noted that adhering to the new rules has become “very, very complicated” and that people were unsure if they were allowed to congregate in places such as pub gardens.

Johnson said that citizens should obey the directives of local authorities, especially in places where they have “extra tight measures.” However, it seems he wasn’t quite up to speed with his own government’s guidelines while discussing the question of outdoor gatherings.

“But it is six [people]in a home, six in hospitality, but as I understand it, not six outside. That is the situation there,” Johnson incorrectly explained.

Can people in NE England meet other households in a pub garden?The PM is asked to clarify new restrictions set for parts of north-east England”Follow the guidance of local authorities,” says Boris Johnson, “as I understand it, it’s not six outside”https://t.co/gjNb9xu56mpic.twitter.com/tkxBW2Sdxa

Earlier this month, the UK government rolled out the highly controversial ‘rule of six,’ which forbids gatherings of more than six individuals. Seemingly unbeknownst to Johnson, the directive applies to both indoor and outdoor meetings.

Johnson later tweeted out a correction, saying he had “misspoken” at the press conference.

The prime minister has struggled to stay on message as his government imposes strict policies purportedly designed to stop the spread of a second wave of coronavirus. He expressed concern about ratting on rule-breakers, warning that such behavior would create a “sneak culture” in the UK.

However, both Health Secretary Matt Hancock and Home Secretary Priti Patel have said they would report people, even neighbors, if they violated the ‘rule of six’ or self-isolation orders.

Johnson is far from the only Brit who has failed the test when it comes to observing coronavirus measures: a recent survey found that over 80 percent of people in the UK have broken their quarantine when required to stay at home by health officials.