Hip hop enigma Kanye West has once again left his fans puzzled, this time tweeting out dozens of Orthodox icons, followed by calls for a black revolution. 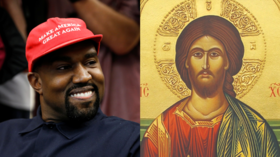 Kanye West emerged from a Twitter hiatus in early 2018 sporting a red ‘Make America Great Again’ hat and declaring his “love” for President Donald Trump. Since then, fans and onlookers have grown to expect unusual behavior from the rap megastar, and Kanye hasn’t disappointed them. He’s shown Trump his plans for a hydrogen-powered plane, launched his own bid for the White House, made his disagreements with the recording industry public, and shared his vision of a Christian-friendly TikTok.

His latest unorthodox adventure, however, is a foray into Orthodox Christianity. After posting a series of classical paintings depicting black people in noble roles, West spammed his Twitter feed on Friday with several dozen Orthodox icons – religious paintings of saints, angels and other holy figures.

Some of the icons – such as one of St. Benedict the Moor – had noticeably black features, suggesting that West’s deluge of religious posts may have been a continuation of his earlier sharing of black people in art.

West did not explain his stream of icon-posting, leaving fans and commenters to guess his intent.

I love how Kanye spent his morning posting Orthodox icons while not caring what his zoomer fanbase thought of it. https://t.co/FLcBuuowvR

I’m not sure which of our nun friends from the @DaughterStPaul have been praying for Kanyebut I do know that it’s working pic.twitter.com/D9NvbZwYg9

Kanye sharing this dope icon was not what I expected this morning but I’ll take it. Who doesn’t need protection against the wickedness and snares of the devil? https://t.co/jyK10X2S9w

Some weren’t enthused though. “If this is like some appropriation thing I will be mad,” one commenter tweeted.

why is kanye posting orthodox icons… if this is like some appropriation thing i will b mad 😃 https://t.co/1wQZ6Hbyvt

By Saturday, West appeared to have forgotten about the art of the Eastern Orthodox. Instead he was posting artistic depictions of the 1791 Haitian Revolution, which pitted slaves against their French colonial overlords. “We are here to complete the revolution,” he declared. “We are building the future.”