Three people were murdered in New York overnight into Thursday, in line with a grim trend that saw police responding to the highest number of shootings in over 20 years last month amid a leftist push to divest from the force. 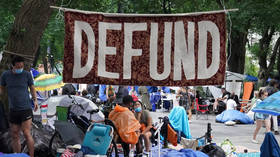 The murders took place in the space of 20 minutes early on July 2, as two men were shot in the back of their heads while sitting in a parked car in the Bronx, and another man was shot in Brooklyn.

Such incidents might seem like a routine night in a municipality with more than eight million residents, but they follow a disturbing trend of rising violent crime in many of the biggest American cities. Citing police sources, the New York Post reported on Thursday that the NYPD responded to 205 shooting incidents in June, compared to the 89 incidents during the same month last year. In terms of statistics, gun violence on a somewhat bigger scale was last seen as far back as in 1996, when 236 shooting incidents were reported within the same period.

However, that increase apparently did not prove to be a concern big enough for Big Apple leaders when they decided this week to cut police funding by $1 billion. The decision came amid Black Lives Matter protests across the nation, with many demanding that police departments be defunded.

It’s a pretty safe bet that New York City Council members couldn’t help but hear those voices when they made their budgeting decisions since protesters have surrounded city hall much of this week. While $1 billion might seem like a ton of money, some progressives, including US Rep. Alexandria Ocasio-Cortez, whose district includes part of the Bronx, argue that the partial defunding is no more than a drop in the bucket, while pushing for more drastic cuts.

The budget move follows a decision last month to disband a 600-person unit of plainclothes police that was designed to help prevent gun violence and other crimes. NYC Mayor Bill de Blasio, meanwhile, has been rallying behind the divestment from the force, announcing that the city will put the money “into the needs of our young people” instead.

New York is not alone in experiencing a crime wave. Chicago, for instance, had 1,384 shootings in the first six months of this year, a 45 percent increase from the same point in 2019, police data showed. In Minneapolis, where the latest round of Black Lives Matters protests began after 46-year-old black man George Floyd was killed on May 25 in police custody, shootings have risen 47 percent in a year to 190, according to city data. That did not stop Minneapolis City Council from voting unanimously on June 26 to abolish the city’s police department, nonetheless. The “dismantling” of the police force did not go without hiccups, however, as three of the council members later were provided with private security guards, at a taxpayer cost of $63,000 over three weeks, after receiving death threats.